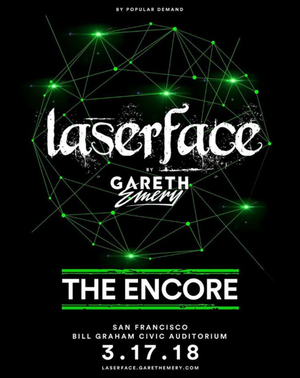 Event Description
In November, Nicelasers and Gareth Emery put on one of the most ambitious shows either of them have ever done. It was called #laserface.

The show sold out months in advance, and although it was one of the hardest, most technically demanding shows either of them had either worked on, the feedback they got from everyone who attended blew them away. However, there was one nagging question.

âWILL THERE BE A WEST COAST SHOW?â

They thought long and hard, and decided there was no way they could forget the West Coast, and especially their beloved home state of California. Plus, they both wanted to do the show one more time, to improve a few things, and do it as best as we possibly could.

(And also, to get a proper video. The bass fucked up the cameras in NYC so the video didnât really do the show justice, and they wanted to make sure they captured it properly for everyone around the world).

Laserface: The Encore. This will be last show of this current laserface tour. After this, weâll go back to the drawing board, and think about what we do next. In short, you donât want to fucking miss this one.
Buy Tickets Edit