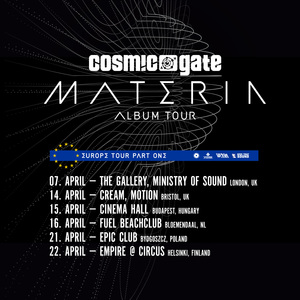 Event Description
East coast to West (and pretty much every electronic-music-speaking metropolis between!), Cosmic Gate have spent the last 3 months packing dancefloors across the States. Delivering their purest musical essence through âMateriaâ, the albumâs 22-date North American tour has wowed Cosmonauts coast-to-coast, drawing rave reviews along the way.

Now, playing their part in 2017âs trance spring, itâs another continentâs chance to get that bit closer to âMateriaâs sonic magic.

Into April, Nic & Bossi switch their focus to Europe, today dropping word of their first tranche of NSEW dates across the continent. Gearing up on April 7th at the Ministry of Sound, Nic & Bossi bring all âMateriaâs musical verve and eye-socking visuals to London town, before heading way out west to Bristol the following weekend. Eastern European hotspot shows like Hungary and Poland follow, while central and northern regions like The Netherlands and Finland are locked to rock later in the month.

Whetting the appetite that much more, you can get a peek at whatâs in store, via âMateriaâs Europa trailer !

Full date & place details below; more info on ticket availability is available through the Cosmic Gate social media resources listed below! Oh, and if you donât see a city near you featured below, fear not! A second leg of European âMateriaâ dates will be announced a little closer to summer.