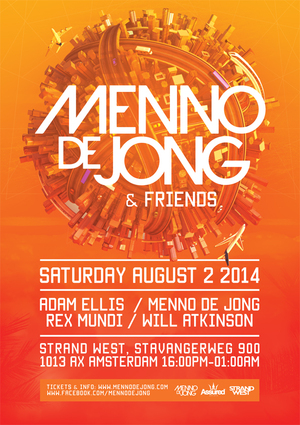 Event Description
On Saturday August 2nd, 2014 Menno de Jong will be organizing the first edition of a brand new event: Menno de Jong & Friends. For this event he will be inviting some of his most respected colleagues from the Trance scene to DJ alongside him at the very intimate venue Strand West in Amsterdam, with a breathtaking view of the harbour. With guests such as Will Atkinson, Adam Ellis and Rex Mundi this will be an amazing event for Trance enthusiasts from The Netherlands and beyond.

2014 has been a spectacular year for Menno filled with new releases and collaborations such as Any Other Day, Creatures of the Night ft. Noire Lee and the much-anticipated collab with Adam Ellis, Solicitude. In the last year he has traveled the world, bringing energetic and uplifting sets to fans everywhere. From Buenos Aires to New York and Manila to Sydney the crowdsâ responses have matched Mennoâs infinite enthusiasm.

The supporting lineup has also seen an action packed year. Will Atkinson has taken things to another level in the higher BPMs, with the well-crafted releases of Darkboy pres. Damage and Isolator and an impressive line of remixes for Ferry Corsten, Aly & Fila and more. Willâs expertise and talent also stretch to other styles of music as he experiments with different sounds, all contributing to his highly defined dark style.
Adam Ellis has seen exponential growth since he surprised the world with his debut track Napalm Poet. His remixes and productions have seen much-deserved recognition by the superstars of Trance, especially his already legendary remix of Creatures of the Night and latest single Velocity in French.
Finally, Rex Mundi will be using his journey like Coldharbour sounds to build the day to a musical climax.

Menno is ready to showcase the true talent of todays Trance scene in a way that embraces the meaning of Trance. Join us for this unique event and rest assured that you will walk away musically satisfied and with beautiful moments to remember.