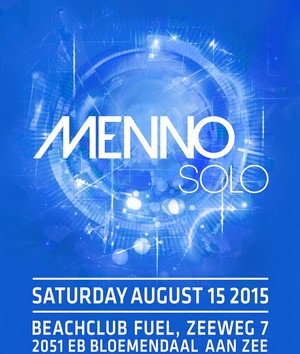 Event Description
On Saturday August 15th 2015 Menno de Jong is bringing back his extended DJ set expertise to the beautiful beach of Bloemendaal aan Zee in The Netherlands, at a short distance from Amsterdam. Here lies Beachclub Fuel, with a spectactular view of the sunset and the perfect indoor and outdoor space for electronic music events. The bi-annual âMenno Soloâ beach event in The Netherlands has become a firm fixture on the calendars of Trance music enthusiasts worldwide and an exclusive opportunity to hear Mennoâs view on the current state of Trance as well as a fine selection of classics in a musical progression perfectly suiting the beach setting.

Itâs been a busy two years for Menno since the previous edition. Signing with Black Hole Recordings and having released his argueably biggest vocal release to date âCreatures of the Nightâ, together with Canadian vocalist Noire Lee, following up with an impressive list of releases. âSolicitudeâ with Adam Ellis, âConnectedâ with Shelley Harland, Stereojackers and Mark Loverush, âAny Other Dayâ and âYour Heavenâ with Polish singer Aneym have all found their way into the playlists of the biggest names in the Trance scene and helped build Mennoâs long and succesful career in the Trance scene to an exciting new peak. Having brought his extended sets accross the world to New York, Buenos Aires, Minsk and many other places he now brings it back home to the Netherlands for the biggest edition yet.
Buy Tickets
Members Who Attended: 1
Map
Edit