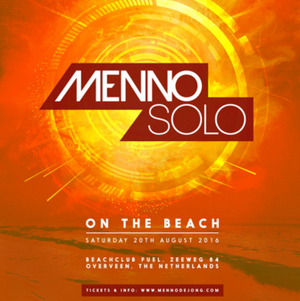 Menno Solo On The Beach

Event Description
After taking over Westerunie in Amsterdam for a special Winter Edition of Menno Solo the concept is heading back to Beachclub Fuel in Overveen for a brand new edition. On Saturday August 20th Menno de Jong will bring you another fine flow of Progressive, Psy and of course Trance with the sun setting behind the DJ booth.

Itâs been a busy year for Menno. Since taking over as A&R manager of In Trance We Trust he has taken the brand to new heights, adding an impressive list of talent to the roster, mixing the 20th anniversary edition of the legendary In Trance We Trust mix album series and signing off on the first branded events around the world. His production and remix career has been on the fly since the release of his biggest vocal single to date âCreatures Of The Nightâ. Menno Solo â On The Beach will be an exclusive opportunity to hear the last works from his studio, the In Trance We Trust imprint and his talented peers throughout the Trance scene.

The official ticket sales will kick off on Wednesday January 20th with a limited amount of early bird tickets available through www.mennodejong.com/tickets