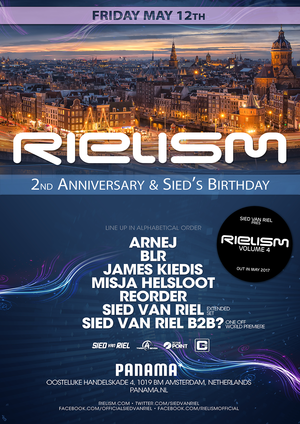 Event Description
Friday May 12th, Club Panama Amsterdam had better make their order for plenty of cake at the local bakery, because on May 12th, celebrations are in order for Dutch DJ, producer and label-owner Sied van Riel. That Friday night, the Riel Deal throws an intimate birthday bash, inviting some of his favorite colleagues for a night of musical mayhem. Besides blowing out the candles for his birthday, this Rielism Night also marks the 2nd anniversary of his very own Rielism label and the release of the official Rielism Volume 4 compilation. Sied: âTiming couldn't be better!â

On the night of and before the big Armin Only show at the Ziggo Dome, Sied van Riel invites trance lovers from all around the globe to join him for a party of his own. With so many highlights to share, an event like this wouldnât be complete without a jaw-dropping Sied & Friends line-up. Sied welcomes visitors to the sounds of Canadaâs Arnej, UKâs James Kiedis, Slovakiaâs ReOrder and fellow-Dutchies Misja Helsloot and BLR. Sied himself will be gracing the decks for an extended set, alongside a worldwide exclusive b2b set with a mystery guest â adding a new meaning to the #BoRiel hashtag. A promising night with Rielism heroes behind the decks, Riel music lovers on the floor and King van Riel stuffing his face with cake â no worries, it wonât be Oaki style.

Sied:âIâm very happy to bring Rielism events back to life this year. After editions on Ibiza and a year hiatus, May 12th is the date. Timing couldnât be better, as that month weâll celebrate 2 years of Rielism as a record label, the release of Rielism 4 and May 12th also happens to be my birthdayâ¦talking about Keepinâ it Riel!â

Tickets for Rielism Night at Panama, Amsterdam on May 12th are available here. For more info and announcements, check out Sied van Rielâs Facebook Eventpage.