Thoughts?
Now known as Randy Derricott. I may sometimes use the DJ Ranz alias for certain projects though.

Posts: 52943
# 27 June 2016, at 09:22
I think it's stupid to let the future of a country be decided by a referendum. It's the stupidist thing to do. No matter what the results are, not just cz I don't like the results. You can say it's demacratic, but it's overdone. Every 4 years there are already elections when you can vote for certain political ideas. Including pro- or anti-EU. But back then the people apparently didn't care much, because the anti-EU politicians didn't win and also the amount of voters were a lot lower than with this referendum.

2nd reason why I'm against referendums is that the big majority of the people are not intelligent enough to have any idea about the concequences are of their vote. Most of them base their vote on sentiments. Leading a country based on sentiments is the worst you can do.

Leaving EU doesn't just mean you can decide your own laws again. London was 1 of the economic capitals of the EU. They are having a petition now to become independent from the UK. Scotland is thinking about a new referendum to leave the UK. Spain is thinking about trying to get Gibraltar back. In the future multinationals will prefer other countries who still are in the EU for their European headquarters, multinationals which are now situated in the UK will leave. A lot of jobs will be gone for British people.

Export and import will become a lot harder. With leaving the EU, they also leave the Sjengen agreement. Besides that it'll get much harder for tourists, all transporters will lose a lot of time and therefor money at the border. This will cost the UK many millions annually.

And then there's footy. Most 'leave' voters probably didn't think about that. There will be no longer free traffic of emplyees, so foreign players will need a work permit again with strong rules. Players have to be at least 18 to play in a foreign country, however the FIFA made an exception for the EU where the limit is 16. This won't count anymore for the UK. Better for all other EU countries, maybe good for the English national team as well, but not for the Brittish clubs.

And there's probably much more to it. In one way, I'm thinking, ok, good riddance, but for those who wanted to stay in the EU I feel sorry. I think the UK needs the EU more than we need them. But the future will have to tell us. I hope other countries will wait with referendums till the concequences of the Brexit are visible.
#StayStrongAppie

Posts: 52943
# 27 June 2016, at 09:58
Funniest thing I heard btw, was before the referendum from one of the 'leave'-campagne leaders that the UK should decide their own laws and that it's not other countries' business. I hope they'll keep that in mind when they interfere again in other countries' politics. The EU for example, but also in Africa, the Middle East or anywhere else...
#StayStrongAppie

I for one think that they made a VERY rash decision in wanting to leave the EU and that they acted on impulse without thinking about the total outcome.

Because of all the aforementioned points, this move could have the potential to damage the UK's (and possibly Europe's) economy.
Now known as Randy Derricott. I may sometimes use the DJ Ranz alias for certain projects though. 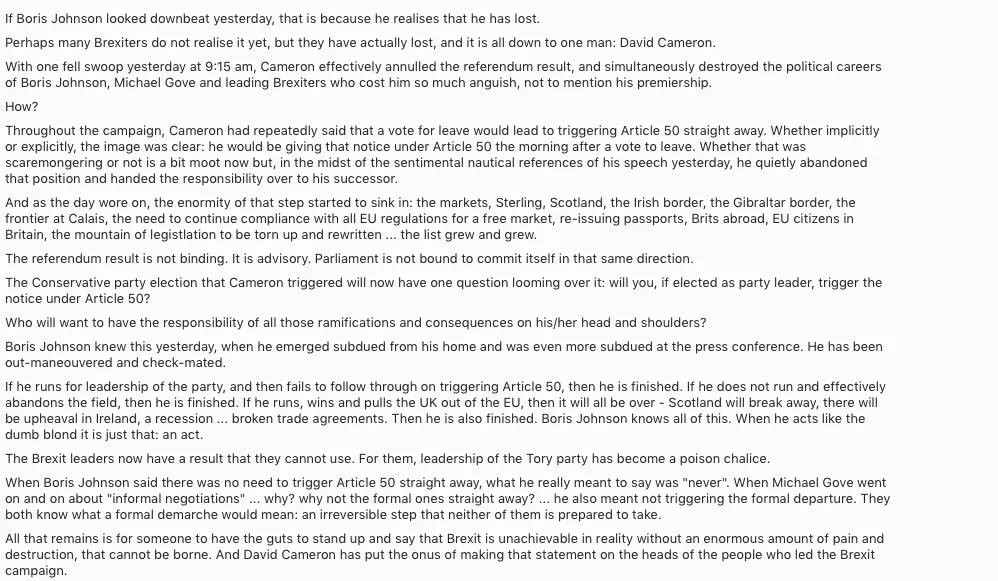