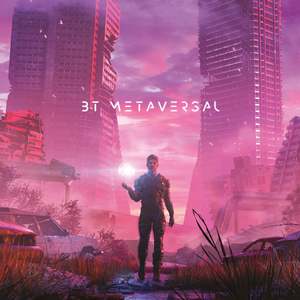 Description
Thereâs simply never a dull moment in the world of BT - from his landmark studio albums. live performances, technical prowess in the studio, soundtrack scoring, to his penchant for bringing the future forward to the present - itâs all incredible. Now, we open a new chapter, the world of Btâs âMetaversal.â

âMetaversalâ is BTâs 14th studio album, originally designed from the ground up for the blockchain (more about that here), and now available on all streaming platforms via Black Hole Recordings.

Whereas, BTâs previous studio album release, The Lost Art Of Longing,â continued down the beloved electronic music artistâs path of perfectly melding together dance music with elements of pop, âMetaversalâ steers us in a decidedly different but welcomed direction. As BT putâs it, âMetaversal is more of an experience than an album.â A contrast between gentle and comforting soundscapes and dark and brooding bangers, âMetaversalâ ultimately reveals itself as an album prime for home listening.

âMetaversalâ kicks off with the driving neon glitz of âKintsugi,â a track that is inspired by a metaphor for embracing your flaws and imperfections. It segues to the funk and early Hip-Hop inspired âConfunktionâ and âLaurel Canyon Night Drive,â the latter of which transports into a sci-Fi world thatâs âTronâ meets âEscape From LA.â Next, âStratosphereâ offers an uplifting nod to the prog house fans while âPaper Chairsâ raids the breakbeat vaults for some definitive BT chops. âThe Blue Hourâ is sublime electro chill best experienced when the sun dips below the horizon and the remaining sunlight takes on a mostly blue shade. Yes, you guessed it, this is an occurrence referred to as the blue hour.

Named after a term used to describe the relationship between the human-like appearance of a robotic object and the emotional response it evokes, âUncanny Valleyâ picks up the tempo offering a contrast between progressive beats and gentle music box sounds which float underneath. âImmutableâ is a futuristic trip that resembles a cross between John Carpenterâs classic soundtracking and todayâs finer Synthwave productions. The remainder of the album functions as a lullaby from BT crafted especially for you. âWhere The Sun Meets The Seaâ is all-out bliss, a downtempo song thatâs made for closed eyes and inner soothing. This gently segues into âOverview Effect,â nearly four minutes of ultimate beatless relaxation inspired by a cognitive shift in awareness reported by some astronauts during spaceflight, often while viewing the Earth from outer space. Conscious drifts even further with the closing track, âIf Memory Serves,â the perfect bookend for âMetaversal.â
Buy Like Edit