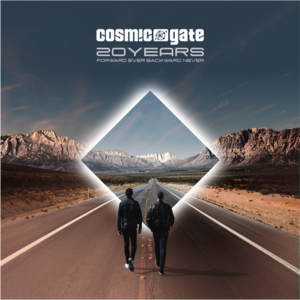 Description
In 2019 Cosmic Gate will mark a milestone: twenty successive years of music-making union. Itâs a period that has given rise to dozens of club classics, genre-shaping hits & outright anthems, 50+ career remixes and 8 (soon to be 9) albums. Regularly reminded of this approaching moment by fans, Nic & Bossi looked at not a way to salute the career landmark, but the way. Fresh off the back of their first Grammy nomination, what theyâll arrive with in the New Year wonât so much rewrite the âgreatest hitsâ rulebook, as leave it for dust.

âWhat Bossi & I didnât want says Cosmic Gateâs Nic Chagall, was something that focussed exclusively on our last 20 studio years - a straight up âgreatest hits of Cosmic Gate or whatever. More, we were looking for something that was a broader echo of what weâve experienced as DJs, with â further - an as-strong emphasis on the futureâ.

Released in the spring 2019, â20 Years â Forward Ever, Backward Neverâ is a music album project, apparently without precedent. âThis will take us closer to the 360 of who we are, where weâve been and â as much - where weâre going, feels Bossiâ. Approaching the release from four distinct points, the album will comprise new Cosmic Gate productions, and collabs with artists who have accompanied their career. Itâll also feature reworks of tracks that have been of particular inspiration, as well as new takes from others on classic Cosmic moments. âWhere these four avenues meet on the album will be the sign-off for our last 20 and mark the start of our next.â
Buy Like Edit