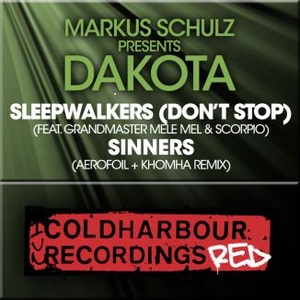 Description
For the 2nd track to be taken from the new Dakota album, old-skool meets nu-school. Having test-driven âSleepwalkersâ throughout April (most notably at ASOT500 where it prompted him to trend worldwide on Twitter), Markus is ready to release his colossal speaker-smackdown. Now though the track is coming with a unique twist!

Back in at the start of this month, Markus crossed paths with the legendary Mele Mel and Scorpio â members of seminal rap outfit The Furious Five. Creators of renowned anti-narcotic track âWhite Lines (Donât, Donât Do It)â and deliverers of âThe Messageâ, theyâd been heroes of Markusâ since he was old enough to break. Steel wheels turned, deals were done and now Markus is delighted to present not just the massive turbine trance of the original âSleepwalkersâ, but also a doubly dope vocal version featuring the wordâs first ever rap MC Mele Mel and Hip-Hop grandmaster Scorpio.

In honour of the occasion, once the studio work was done and before Mele Mel and Scorpio headed back off to New York, Markus convened an old-skool reunion at Miamiâs Club Space in their honour. Kangols went on, Adidas got donnedâ¦ and the âSleepwalkersâ video was shot.

Complimenting Sleepwalkers is a pair of remixes exploring different dimensions of Sinners. Medellinâs Khomha has been earmarked by Markus as one of the names to watch in 2011, notably for his contribution to Prague â11 in the form of Rainy in the Night. His remix of Sinners caused dancefloor madness during Markusâ latest residency appearance at Marquee in Las Vegas, as well as tearing the dancefloor down at the Bal en Blanc extravaganza in Montreal.

And making a name in his own right is Nijmegenâs Aerofoil; about to make his bow on Coldharbour Recordings with his Caress 2 Impress EP, he gives Sinners a dark and twisted treatment, and one which has been frequently supported both in the clubs and on Global DJ Broadcast.
Like Edit