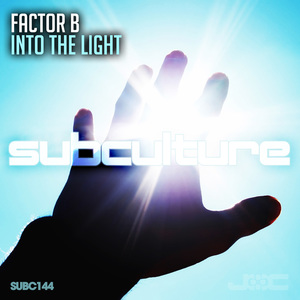 Factor B - Into The Light

Description
Subculture welcomes another trance futurist to its impressive roster today, as Factor B debuts on the label. The Aussie producer hit the release gas last year, with an anthem convoy that by the yearâs end included âInvidiusâ, âLiberatorâ, âOriginsâ and âSomething Like A Cureâ

âInto The Lightâ follows this Aprilâs âWhite Roomsâ out of the gate and weâre going to chance our arm and say with it, we reckon Brendan Blattâs topped the lot.

âInto The Lightâ got its first airing (where else but!) ASOT850 back in February. Inside Jaarbeurs it more than proved its mettle, when Brendan closed his Road To 1000 set with it. âArmin van Buuren, Solarstone and label boss John OâCallaghan are just some of the spinners whoâve since rallied to its radio & club cause, while DJ Mag UK scored it 8/10.â

To be clear, style and energy-wise âInto The Lightâ is not kidding around! If your set of speakers is in need of something that doesnât stint on sonic force, mass or motion, look no further. With a tempo thatâs goes straight for the primetime jugular, more rousing sub-melody flow than the Jetstream and a heart as big as an ocean, âInto The Lightâs got you covered.
Buy Like Edit