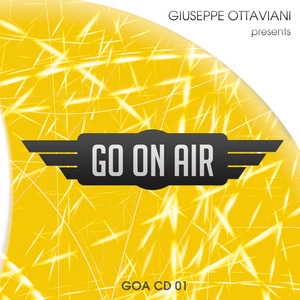 In February of this year, in a new progression to its line, Ottaviani opened GO On Airâs label division. In, but a few short months, release-by-release, GO On Air Recordingsâ following has built exponentially. Drawing glowing praise and plaudit in the process, its releases have routinely drawn ovation-like responses from DJs, fans and the media alike. Of late itâs triggered one of the UKâs best known dance publications to question whether GO On Air Recordings could even be âThe label debut of 2014?â

Now, to sign-off on its astonishing creation year, Ottaviani delivers fans old and new GO ONâs new mix-comp proposition. Assiduously A&Râd throughout the summer months, it contains an extraordinary 30 never-previously-heard tracks. Also on board is audio from the sceneâs big hitters, including Aly & Fila, John OâCallaghan, Roger Shah, Sied van Riel, Sean Tyas, Giuseppe himself (naturally!) and many others. Showcasing the labelâs A/W 2014/2015 music collection, across two exceptional discs and mixes, this is exclusive-packed music mix-comp that dares to bottle lightning and touch tranceâs third rail.

Regarding the labelâs establishment, Giuseppe said: âGO On Air Recordings had been in my mind for such a long time. It just required the right set of circumstances and the right point in my career to push ahead with it. That happened in 2014. What I wanted with GO On Air Recordings is a natural continuation of GO On Air Radioâs policy: music that speaks to me, and I know will speak to my fansâ

Of the album, Ottaviani continues: âI couldnât have dreamed of a better response to our first releases. With those âfoundationsâ in place though, now comes time for the âcementâ! I believe the tracks we have signed for this album will demonstrate that GO On Air Recordings can become a world-class platform to release on. Youâre going to be hearing a lot from the label over the coming months. But youâre not going to hear it anywhere earlier than here!

GO Onâs M.O. is an acutely balanced blend, mixing known names, a smattering of judiciously rebooted classics and a notable focus on pinpointing tomorrowâs stars. With all four fingers on the pulse of the sceneâs most gifted nu-bloods, for the album itâs inked their finest fresh from the studio desk. The production names you may just be starting to hear about; their music though speaks plenty loud for itself.

In terms of what to expect, weâll defer to the dance press, who across the last six GO On Recs months have variously described the labelâs music as everything from âthrillingâ to âthunderousâ, âcoolâ to âa masterstrokeâ and quite simply âWinnerâ!

As the curtain goes up on the first mix, Giuseppe scene-sets with the atmospherically melodic trifecta of Matt Hollidayâs âNew Leafâ, âA New Hopeâ from Oskar Sawicki and Ilya Syntezâs âAwakeningâ. Further in, deeper prog-trance waits in the wings, with Denis Sender & Rafael Osmo âArriveâ, recent GO On release âThe Discoveryâ (from Canadaâs Somna), Dawnâs âThe Things We Never Seeâ and others make the midrange rock and the bass shake. Vocally the album is also profuse, with Alex Staltari turn on Misja Helslootâs âInevitableâ, Paul Legvandâs âI Miss Youâ and John Mash feat Ariette Florenceâs âMelancholiaâ all letting the singers do what they were put here to do.

Man of the Match Giuseppe also lends his maestro-like production touch at regular mix-waypoints. Drawing the first disc to a close, youâll find his Sean Tyasâs collab âPlan Bâ, whilst opening the second is âThe Silence Of Timeâ alongside fellow countryman Andrea Mazza. For trance classicists thereâs something extra special too:
a fresh G.O. revision of 4 Stringsâ timeless âInto The Nightâ.

A genuine feat of A&R engineering, âGO ON Airâ super-impressive recent, thrilling present and so, so bright future are all here, on one sensational album. Itâs available from all good stores from October 13th.
Buy Like Edit