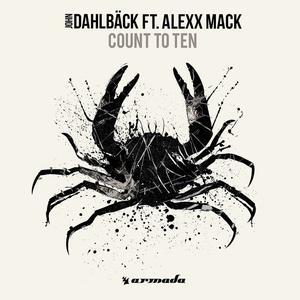 Thereâs something about Swedish electronic dance music producers and their seemingly innate ability to write the catchiest of leads. Upon a single spin of âCount To Ten,â it is guaranteed that the song will ring in oneâs ears for hours or days to come. Uncompromising in its production, âCount To Tenâ has perhaps more in common with radio-friendly synth-pop than it does with house music. While the boundaries of progressive-house music have widened to encompass a field where outright pop songs are as much at home on the dancefloor as their grittier, more âundergroundâ cousins, DahlbÃ¤ck sees no reason to limit himself to just one style. The first single from Saga, âRaven,â had more of a dark, clubby vibe and that track got dance music fans ready for a long night of celebration. The second single from Saga, âAtlantis,â held a deep allure colored by the songâs warm, creamy vocals. âCount To Tenâ is unabashedly buoyant and upbeat, positive to the core. It is this versatility DahlbÃ¤ck possesses as a producer that suits him so well as a performing DJ. There is literally nowhere he is afraid to take his audience, and heâs loved for it.

The Radio Edit of âCount To Tenâ pops the champagne cork right from the outset as the high-pitched female vocal comes in. Instantly, this edit has all the workings of an effervescent pop tune, not only of a great progressive-house track. This edit is pure in its crystalline directness and at no point in the song does DahlbÃ¤ckâs hand waiver. This song shows that DahlbÃ¤ck is unafraid to go this pop music route because he knows his clubbing bona fides remain intact. The Extended Mix has a longer, syncopated intro with a beat that sets the stage for a spell before the main vocal even enters the picture. The vocal is more treated and stuttered on this version and the infectious, high-energy refrain makes even this mix easily grasped. The sunny energy is addictive and irresistible. Popstar-in-the-making Alexx Mack has a bold, come-hither voice full of self-affirmed female swagger and it is absolutely of-the-moment. Music lovers can also catch a glimpse of Mack in the official music video for âCount To Tenâ to be released in late-December.

As a producer and DJ, John DahlbÃ¤ck has an inherent sense of what works on a dancefloor. His music consistently earns support from the top names in the industry, including from Avicii, Pete Tong, TiÃ«sto and Swedish House Mafia, among others. Over the years, DahlbÃ¤ck has had his music released on top record labels, including Ultra, Toolroom, Defected, Spinninâ, Subliminal, Big Beat/Atlantic, Ministry of Sound, Kompakt, Dessous and others. Additionally, DahlbÃ¤ck has lent his sought-after production skills to remixes for the likes of Lady Gaga, 50 Cent, David Morales and others. Having grown up in a family reverberating with music, one of DahlbÃ¤ckâs earliest forays into electronic music was while tinkering with his fatherâs Atari computer as a youth. It was perhaps unsurprising that DahlbÃ¤ck would sign his first record deal at age 17, a time when most of his peers were just discovering the club scene. Today, DahlbÃ¤ck DJs at leading nightclubs and festivals around the world including at UshuaÃ¯a Ibiza Beach Hotel on the Balearic island of Ibiza.
Like Edit