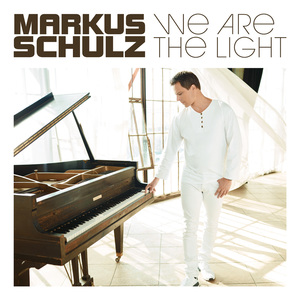 Markus Schulz - We Are The Light

âWe Are The Lightâ is a release that draws on musical areas Markus has been long recognized/venerated for, as well as ones more recently ventured into. Given the two albums that immediately precede it, itâs also a release heâs aware thatâll come with a degree of predetermination.

âYeah, I know!â Markus says wryly: Dakota: âdarkâ, Markus Schulz: ânot darkâ. Itâs an easy expedient way of looking at it. Personally though, with this album, I feel weâre transcending that. Weâre moving beyond it and into a third band. If anything, this is âMarkus Schulz: âpositiveââ.

Whilst doubtless sharing some sonic genetics with both âWatch The Worldâ and last yearâs Dakota LP, it is too neat to peg âWATLâ as either straight successor to the former, nor clear-cut yin to âThe Nine Skiesâ yang. Something indeed more conversional and epochal took place at the start of its production. A shift in outlook that had a decisive effect upon its make-up. This album is in fact a result to both releases and marks an expressional ascension for Markus.

This is something that its track titles swiftly underscore. Numbers like âThe Awakeningâ, âYou Light Up The Nightâ, âHeavenâ, âWe Havenât Lost Our Wayâ, âSafe From Harmâ, âThe Dreamersâ, âTogetherâ, âUtopiaâ and âWe Are The Lightâs title single all telegraph its standpoint clear as day.

The album features a company of singers and fellow co-songwriters that - even by the gilt standards of Schulzâs previous LP releases â are an unparalleled assembly. Markus has consciously (as he puts it) âmixed up the packâ on the album. For every familiar name, thereâs a co-writer making their debut. For every neophyte, thereâs an established artist from another style-space being introduced to the electronic music realm.

From the already-acquainted side, âScream 2âs Seri is back collaborating, as are âWatch The Worldâ alumni Nikki Flores, Adina Butar and Soundland. As expected the album houses the 2018 Schulz singles âSafe From Harmâ, âCalling For Loveâ and âUpon My Shouldersâ. (Those respectively marked Markusâ debut collaborations with Emma Hewitt, JES and Sebu of Capital Cities fame). On the spellbinding âSymphony of Starsâ, Christina Novelli also makes a first time appearance, while the album seeks and finds talent from other European quarters too. Alina Eremia and Smiley â already immensely successful household names inside their native Romania - make dazzling first time musical debuts outside their home country.

âWe Are The Lightâs has also afforded Markus the much desired opportunity to resume the song-writing that first manifested on âWatch The Worldâ. For each album track, almost without exception, Markus sat down with singers and songwriters to contribute thoughts, angles and individual insights, as well as lyrical lines, verses & choruses.

Marking its final pre-release milestone, âWe Are The Lightâ namesake single dropped today, and along with it, its astonishing, nothing-less-then mesmerising official video. Shot amongst the Californian redwoods during the snowy frontend months of 2018, the Nikki Flores-sung title track is in itself an embodiment of the newly found positivity thatâs the primary driving force behind the album.
Buy Like Edit