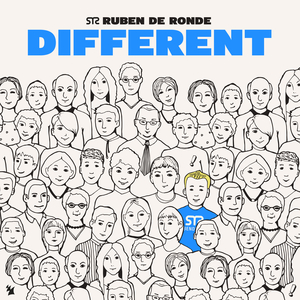 Description
By looking past conventional boundaries and exploring the opportunities that lie beyond, Ruben de Ronde is a shining example of how something âDifferentâ leads to something greater. On his third solo artist album, the globally renowned Dutchman and Statement! Recordings head balances high-end tracks with a number of exclusive creations. Take your pick from âLucky Pennyâ with Elevven, âGoldâ starring Roxanne Emery, âTrinityâ battling FUTURECODE or any of the several exclusives; Ruben de Rondeâs biggest statement (!) yet is immersed in out-of-the-box thinking, making for a collaborative album in every sense and confirming that âDifferentâ is not a dirty word.

The unique production values on âDifferentâ are suggested on âThe Hardest Partâ, which starts out with an old-school riff, twiddling notes and a some messing around with plugins. Itâs viewed and commented on in real time by Ruben de Rondeâs Twitch following, as a mixture of music tutorial and fan-rewarding, all-access insight. One vocal from HALIENE later â in the right place at the right time â and Ruben de Ronde had a completed weapon ready to parade at sets the size of Ultra Music Festival in Miami.

Electronic Family favorite âShadow of Usâ â the official anthem for the biggest outdoor trance festival in Europe â sees Ruben de Ronde express a telepathy with the L.A. based duo Elevven that even he canât explain, souping up a previous archive production with the assistance of singer-songwriter and hit maker Matias Lethola. The deeper, more chilled âGoldâ, featuring Roxanne Emeryâs gospel-like tones, listens to the albumâs individuality and moves âDifferentâ away into the shaded outskirts of the dance floor.

Ruben de Ronde: ââDifferentâ has been in the making for about two years. The biggest difference from the âMy Storyâ album is that I have very much involved my subscribers, viewers and followers on video streaming platform Twitch in the creative process, from the very first beat until the final effect and melody. By being open and transparent with everything that I do in the studio, I have received tons of amazing feedback and tips along the road from viewers, and also have been able to educate others at the same time. I really feel that this album is a combined effort of everybody. I think this is the first-ever trance/dance album that has been produced this way, and I am mega proud of the result. While other artists might think I am revealing too much of my workflow, sound design and the music in general, I think sharing all of this in advance has only made producing this album more fun. It is indeed a âDifferentâ kind of way of sharing my music with the world.â

âDifferentâ is the third solo album from Ruben de Ronde, following âMy Storyâ and âFrom Sao Paulo to Sofiaâ. The Dutchmanâs consistency has earned him his accolades from the sceneâs top tier as he draws inspiration from musical styles across the board without straying too far from his signature progressive trance sound. The DJ, producer and Statement! Recordings label owner has remixed Armin van Buuren, Cosmic Gate and Above & Beyond, and graced the stages of Tomorrowland, Untold, Hi, UshuaÃ¯a, Privilege and Amnesia in Ibiza, Ultra Music Festival in Miami and Europe, and EDC Las Vegas, continually scoring more must-visit events.
Buy Like
Members who like this Release
Edit