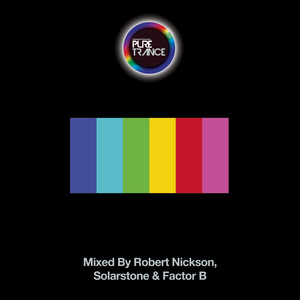 So here we are, approaching the end of another P.T. year, ready to witness a new gathering of the Pure. With five titles now under its belt, its honour roll of former mixers is already rich. Trance crusaders Giuseppe Ottaviani, Bryan Kearney, Orkidea, Gai Barone, Sneijder, and Forerunnersâ mixesâ have already passed Pureâs litmus. 2017âs draft sees Netherlands based trance-master Robert Nickson and Australian fast-ascender Factor B join its illustrious roll call. Naturally Solarstone is spear-tipping this new puritan assembly, all now ready to âpreachâ its gospel!

The album draws its track weapons from the current and future arsenals of Pure Trance Recordings, as well as a judicious handful of like-thinking labels (Black Hole, FSOE, Flashover and Subculture among them). From their annals music & mixes from irreproachable names like BT, System F, Armin van Buuren, Andain and Three Drives abound. For every legend though, equally there is a rising star. Lostly, Peter Steele, Basil OâGlue, Future Disciple, The Noble Six, Neptune Project and couple of dozen others all bring their latest wares to Pureâs laser.

It goes without saying (but weâll do it anyway) that Robert, Factor B and Solarstone himself have stepped up to the plate with enough exclusives to make a tabloid weep. So hang on tight, its Volume VI time - Vive La Trance!

Having successfully established its âopen-till-closeâ format with last yearâs first triple disc edition, 2017âs sixth volume arcs the same trajectory. Anglo-Norwegian producer Robert Nickson is the man tasked with PT VIâs âdoors-openâ set, to which he delivers a masterclass in building clubfloor suspense. Over the opening course he seeds it with the prog-trancers like David Forbesâ Monolith, Slam Duckâs âMercury IIâ âBarracudaâ from Three Drives and Forerunnersâ âJust For A Whileâ. At the mixâs meridian he drops âAtomsâ - his new RNX preparation, and under his own name, in its latest stages comes the celestial âSomewhere In Spacetimeâ. In between flows all manner of trance manna, including new works from the likes of Basil OâGlue, Lostly and Gai Barone.

Of his participation in the album, Robert said: âItâs been an absolute pleasure to be part of âPure Trance 6â. Sourcing the tracks from every corner and creating this mix took months of preparation and meticulous fine-tuning. The first disc is very special as it can create the flow and atmosphere that leads the entire album. It has presented an opportunity to showcase another side of me that others may not have heard yet. Enjoy!â

On his modus operandi for the albums, Solarstone said: âOne of my aims with each new edition of this compilation is to make the mixes a combined journey. Volume 6 is, I hope, the best example yet. Robertâs completely nailed the progressive build-up and you canât get any more euphoric than Brendanâs mix! With mine nestled nicely in the middle, this is a proper Pure Trance soundtrack.â

The final set of âthe nightâ is mixed to nth degree perfection by Pure Tranceâs now traditional new(er)comer DJ. Brendan âFactor Bâ Blatt may have been making waves in trancedom for just 5 years, but theyâve been peaking ever higher with each 365 thatâs passed. Factor B front-loads his mix with music hot off the studio desks of Neptune Project, Activa, Cold Blue and TrancEye. His own âInvidiusâ, The Noble Sixâs âBlack Starâ and âColourwaysâ, courtesy of Lostly all preface Brendanâs Back To The Future Remix of Solarstone & Scott Bondâs âRed Line Highwayâ. Bringing mix-matters to a head, Will Reesâ rework of Gai Baroneâs âLost In Musicâ and Solis & Sean Truby âCoastal Routeâ deliver PT:VI its final and most climactic moments.

On receiving his Pure Trance button, Brendan says: âmixing âPure Trance 6â was one of the most exciting, yet challenging projects of my career thus far. My love for trance began during the golden era of the âjourney mixâ-compilations, ones that still give you the same thrill when you return to them years & years down the line. To me, the Pure Trance series still captures this ethos and naturally I wanted my disc on PT6 to be of the same calibre!â
Buy Like Edit