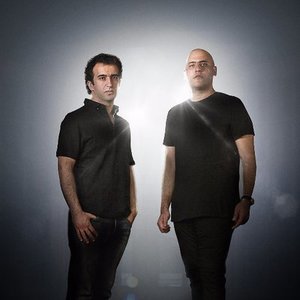 Description
As hot as the Sahara and standing every bit as tall as pyramids, theyâre the single most successful group to have emerged from the spiritual lands of Egypt. From the Med to the Red and from up high in Cairo, to down deep in the Sinai, theyâve built an immense, ultra-loyal in-country following, From that foothold turntable Shamans, Aly Amr Fathalah and Fadi Wassef Naguib went global. With their career-launching Egyptrance releases (inc. âEye of Horusâ and âSpirit of Kaâ) through to latter-day master-blasters like âWe Control The Sunlightâ, Perfect Loveâ , âRunning Out of Timeâ , and âMysteries Unfoldâ their production credentials are only now matched by their spinning ones. Ranked as one of the 20 biggest DJ acts in EDM (source: DJ Magazine Top 100 DJs 2013), they delight crowds now numbered annually in the millions, bringing their inimitable sound to the worldâs most prestigious clubs and festivals. No mirage, no illusion - this is Aly & Fila.

For close to a decade their spirited take on the trance sound has captured the hearts, minds and imaginations of planet trance. With their whip-smart productions and sandstorm sonics, their performances have raised the bar at some of the worldâs most recognized clubs. Comparably theyâve also ruled at EDMâs biggest festivals â EDC - Las Vegas, Tomorrowland, Global Gathering, Dance Valley, Stereosonic, WMC and Full On Ferry to name just a few. Continuing in a long tradition of playing the worldâs most established and respected stages, in Spring 2014 they will rock ASOT 650. Marking the 8th successive year theyâd done so, the Egyptian duo are the only spinners aside from Armin Van Buuren and Markus Schulz to have played such a run. This combined force of production and turntable feats has resulted in string of high charting positions in several of EDMsâ key polls. Included amongst them are seven consecutive years in DJ Magâs annual countdown (reaching #20 in 2013) and a #2 notch on Trance Podiums Top 50 DJs in the same year.

Spreading the A&F message around the globe is their Future Sound of Egypt radio show. Beaming to countless thousands of desktops every week, August 2013 saw its 300th episode hit airwaves. This was marked by the FSOE 350 Worldwide Tour over 5 Cities, which drew fans from all four corners to these events. 2014 sees Aly & Fila reach 350 Episodes of the Radio show and will once again mark this celebration by hosting a worldwide FSOE 350 Tour with so far Sharm El Sheikh, New York City, El Salvador, Medellin and Lubiaz in Poland announced with more to be announced.

The Future Sound of Egypt marque is further amplified by Aly & Filaâs widely respected imprint of the same name. A label sub-division of the industry leading Armada Music empire, through it they have rained continuous floor-fire, with one A-list championed release following another. With âWe Control the Sunlightâ, the pair scored the biggest trance track of the year when the listeners of Armin Van Buuren's A State of Trance radio show voted it Tune of 2011. Throughout 2012 they continued to bring some of the yearâs best music to club & festival sound-systems. Among them were collaborations with Roger Shah (on âPerfect Loveâ) and Solarstone with âFireislandâ. It also saw them re-team with âWe Controlâ singer Jawden on âComing Homeâ, for a track that DJ Mag cited as âmaking hairs stand up, goosebumps pop, hands shoot up and jaws meet floors!â They also reworked Gareth Emeryâs âConcrete Angelâ (which subsequently became the best-selling trance track of 2012), as well as other smash tracks from Andy Moor and Alex M.O.R.P.H.

2013 saw the duo release the follow up to their Rising Sun Album by releasing their second artist album â Quiet Stormâ with monster hits including âMysteries Unfoldâ and âRunning Out of Timeâ .

2014 was a very successful year for Aly & Fila. That summer saw the release of their Third Artist Album titled â The Other Shoreâ with three singles off the album being released in 2014 including âFor All Time feat Jarenâ , Eye 2 Eye with Roger Shah and Sylvia Tosun and âRunning with Sky Patrol and Sue McLarenâ. Also released in Early 2014 was the the Remix Album of their artist album Quiet Storm. This Year also saw Aly & Fila Mixing the legendary Trance Nation Compilation released by Ministry of Sound.

With several Dj Poll Results in 2014 which saw Aly & Fila Voted No.28 in The DJ Mag Top 100 , Voted No.1 in the TrancePodium Top 100 DJ Poll , Voted No.1 DJ in the Middle Eastern Music Awards, Nominated in the Best Trance DJ Category in the Ibiza DJ Awards, Voted No.5 in the Magnetic Magazine Top 100 DJ Poll.

2015 has seen a busy year taking shape already with two Albums already. One being released already is Aly & Fila â The Chill Out Album and second release also summer of 2015 is Future Sound of Egypt Volume 3 Compilation. Having just released their latest single âShineâ with Roxanne Emery , The Other Shore with Aruna and the FSOE 400 Anthem with Omar Sherif and Jonathan Carvajal .
With 10 FSOE 400 Celebrations announced all over the world the year there is exciting times ahead for Aly & Fila and their fans worldwide. The pinncacle of the shows was Aly & Fila proudly hosted FSOE 400 Celebration at the Great Pyramids in Giza , Egypt. Which took place in September 2015. The FSOE 400 Tour also conincided in a FSOE 400 Compilation being released
Also announced in July 2015 is that Aly & Fila for the 2nd Year in a Row have been Voted No.1 Trance DJ in the World in the TrancePodium Top 100 DJ Poll of 2015. Aly & Fila were also Voted Number 2 in the 'Best Trance DJ' category in the DJ Awards in Ibiza. Also in September 2015 Aly & Fila released the highly anticipated second collaboration with Ferry Tayle, this time titled 'Napoleon' .
Releases
Like
Members who like this Alias
Edit