If you happened to be looking in the other direction throughout February, let us catch you up! Events on Planet SHINE have been running - fair to say – plenty hot over the first month of the year. Assumed - and subsequently confirmed - the White Isle breakout is returning for the summer of 2019. For its second season run, word of a venue uptick got out, taking SHINE to its own space at the legendary Eden. From there things started to get a little crazy. Having been on the circuit for but a single season, SHINE’s owners dropped word of a partnership with none other than Tomorrowland, which – come July 20 - will see the marque takeover Freedom - the festival’s second biggest stage.

And now SHINE are delighted to share the entire roll call of DJs that’ll be joining them on the island this year. With PvD’s Ibiza performances clicking back into the traditional #TRANCETHURSDAYS groove, SHINE has once again placed max emphasis on crowd-drawing spinners who embody the truest form of the genre.

Goes without saying that Paul will headline each of the nights and the first month’s worth of shows alone will see him joined by the likes of Bryan Kearney, John O’Callaghan, Jordan Suckley and Giuseppe Ottaviani. Aly & Fila (who’ll SHINE six times over the summer’s duration!) will be doing an XL set on July 11’s opening night. As Ibiza shifts into high season, Cosmic Gate, Alex MORPH, John 00 Fleming, Grum and others will be over to play their part too. Events come to a head on September 19, with SHINE’s co-headliners Paul van Dyk and Aly & Fila both delivering summer summating 3hr sets for its closing party. Every date & every DJ below. Could be time to call the travel agent.

Reflecting on their first season and looking forward to the one ahead, SHINE ambassador Paul van Dyk said: “SHINE brought a breath of fresh air to Ibiza in 2018. To break out and do something new and under our own steam was a wonderfully liberating experience for myself personally and, I think, all involved. The team was right, the vibe was right and the DJs SHINE brought in to play were second to none. Trance and its global family were back on the island in its truest form. That all showed in the reception the night received.

On my last trip to Ibiza this year I dropped into the recently fully redeveloped Eden. I was blown away to see how the venue was modernized and refined. I’ve played the best and most exciting venues in the world and the new Eden is exactly that. Alongside San Antonio’s continuing regeneration, I am sure SHINE will host a world-class 2019 production there. Trance and Eden have a close relationship/shared history that goes back decades. In tandem with the desire to have the night back on Thursdays, I’m delighted to say that SHINE will be moving to the club for the upcoming 2019 season.”

Of the night’s move to Eden, the club said: “We are delighted to be hosting SHINE Ibiza for the first time in San Antonio. We are dedicated to offering a diverse range of club nights to our Ibiza crowd. We can think of no better team to bring Trance to Eden than with legendary Paul van Dyk and the SHINE family for 2019”.

SHINE promoter and MD of The Supernova Group Nick Ferguson echoed that, saying: “We are very excited by the opportunity to move SHINE to Eden for the 2019 season. The club has recently experienced a fantastic redevelopment and resurgence, as has San Antonio. Eden is well run, by people that believe in trance and are passionate about working with an exciting new brand!”

Every Thursday, between July 11th and September 19th 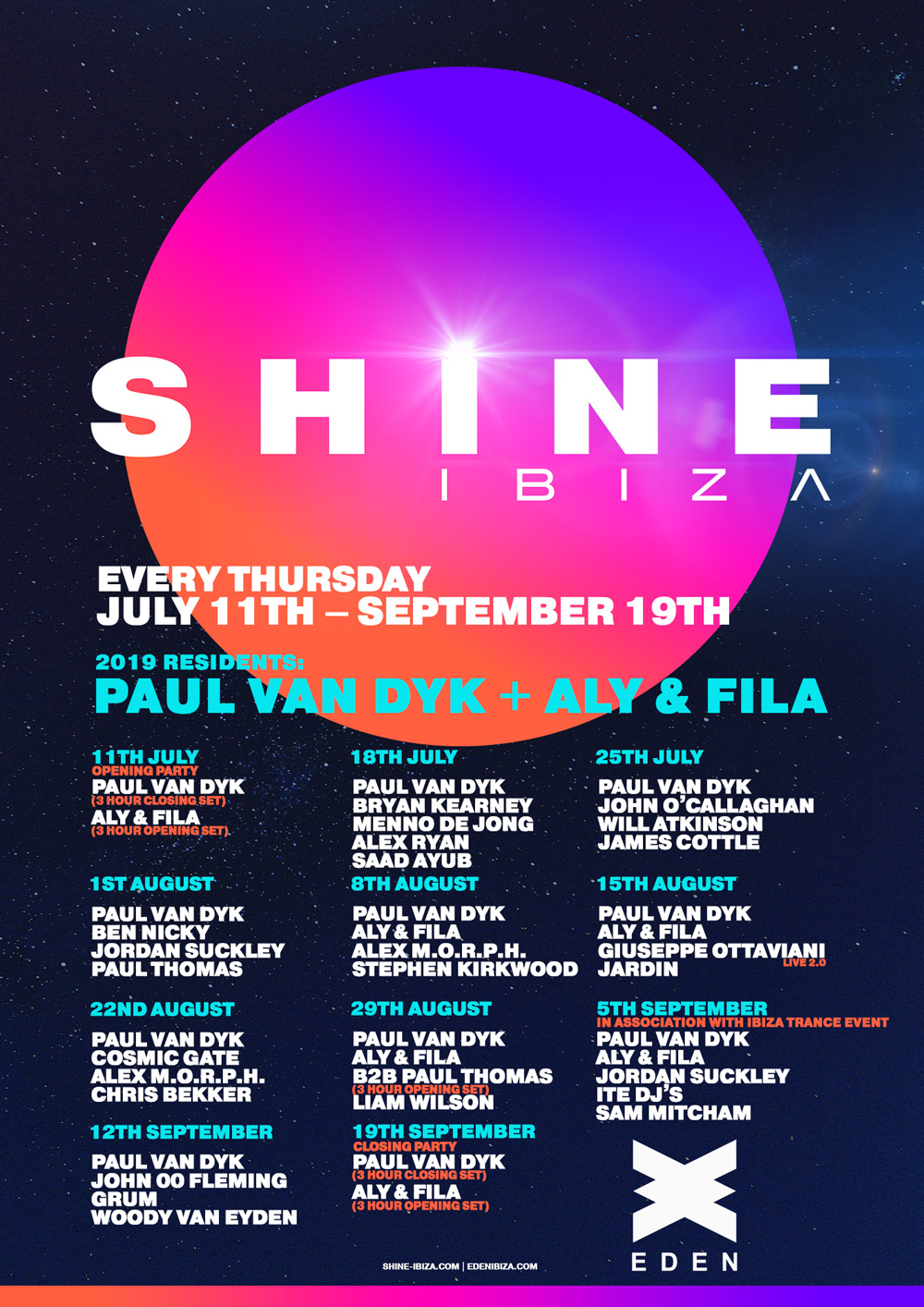