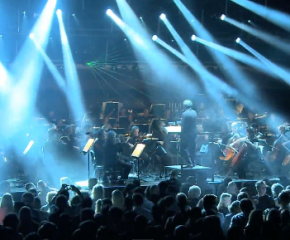 A tribute to Armin van Buuren

Event Description
In 2010, the Oosterport venue in Groningen was shaking at its foundations. The Noord Nederlands Orchestra played a special concert, dedicated to no one less than Armin van Buuren.

They made special classical arrangements of Arminâs biggest hits and it was one of the few times that the visitors got our of their chairs and started dancing. More than 100.000 people tuned into the the live-stream of the night. And guess what? The Orchestra is going to do it all over again!

Due to the tremendous success, NNO decided to take the tribute in reprise and present another night. Esspecially for this concert, they made two new arrangements, of Arminâs âThis Light Between Usâ and âNot Giving Up On Loveâ. On February 23rd, âA Tribute To Armin van Buurenâ strikes down in the Oosterport venue in Groningen once again. All chairs will be removed, and supported by a spectacular laser and sound program, the classical concert will turn into a real dance event.

For those longing for more, thereâs also an official after-party, with Dutch duo 16 Bit Lolitas playing!
Donât miss out on this special happening! Get your tickets at http://www.nno.nu/concerten/tribute-to-armin-van-buuren