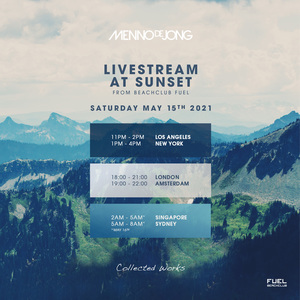 Event Description
Menno de Jong has some exciting news for you. This winter has seemed like the longest one we've ever experienced and although there are promises left and right of better times this summer, that still seems quite a while away. In the meantime we can all use some sort of party, right?

Earlier this year Menno released his Collected Works album with the thought of doing a release event in spring. But since attending an event is still out of the question he decided to bring the party to your livingroom instead. On Saturday May 15th Menno de Jong will be doing a 3-hour album release set, at sunset, right from the beach at one of all our favourite venues: Beachclub Fuel in The Netherlands.

Sounds pretty good, right? You can sign up here to watch live from your home, as well as re-stream in the 30 days after.
Buy Tickets
Members Who Attended: 1
Map
Edit