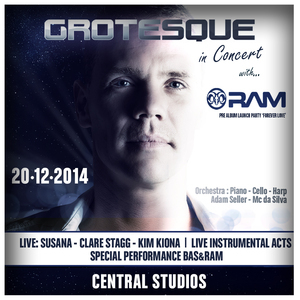 Grotesque in Concert with... RAM

Event Description
Grotesque will be back with a vengeance on Saturday December 20th with another edition of last yearsâ most successful party: Grotesque In Concert! Last year Markus Schulz was the main man behind the decks at Central Studios. This year that honor will be given to Grotesqueâs resident hero, RAM, one of the hottest DJs of the moment!

After a turbulent year, this trance pioneer from Amsterdam has thrown everything he has into his lifelong passion for music. The result will not go unnoticed. Stunning, emotional tracks like âRAMeliaâ and âKingdom of Dreamsâ have brought him the success that he needed to help him through. Despite the never-ending, emotional rollercoaster, RAM has worked twice as hard towards making the most out of his success. His last âpublicâ and perhaps most beautiful tribute to his wife Amelia is his very own artist album, due for release in the early part of next year. With the stirring title âForever Loveâ, this debut album will describe all the emotions that a person must experience when the most beautiful thing is taken away from their life. This mental and emotional process is beautifully interpreted by various vocalists and will without a doubt be understood and respected by every listener. The release of the album will coincide with a worldwide album tour in 2015.
What can you expect from this exclusive edition of Grotesque In Concert?
RAM just cannot and will not wait for his world tour, so he has chosen this unique edition of Grotesque In Concert to be the first and exclusive moment to drop some of the new album tracks. The evening will be made even more special with unique live performances of album tracks who will be presented in a very special way. During the night Susana, Kim Kiona and Clare Stagg will feature as vocalists supported by live piano, cello and harp. Alongside possibly the most impressive light and laser show ever seen at a Grotesque event!

Flashback
You could call it an absolute highlight from last year; the completely sold-out beach party, Strictly RAM. In a showcase lasting for seven hours, RAM took the crowd on an enchanting journey through his musical history of the last 15 years! If youâre one of the lucky 1600 people who was at Beachclub Fuel that day, then you will remember how amazing it was. From beginning to end a steaming, heaving chain reaction of classic Trance from the â90s, up to and including the phattest productions from now! The up-for-it crowd seemed limitless in their energy and appreciation.
Big Surprise! Bas & Ram !!
RAM has a surprise in store for all the lovers of the Hard Trance genre. A special appearance at this unique event will see RAM close his set with someone alongside him in the DJ booth. For the last hour, the dynamic duo Bas & Ram will come together for one last performance. This is just too good to miss!

Tickets
Regular Early Bird tickets are â¬20,= and limited VIP tickets will be â¬27,50 and will be on sale for only 2 days, starting at Wednesday 29th of October 20.00cet until Friday 31st of October 23.59cet.. Only 150 VIP tickets available, includes free CD, special entrance, VIP-deck, Fresh Fruit & Candy.. Sign in on the Facebook event page and keep updated..
Online presale: Easyticket en Paylogic.

GROTESQUE IN CONCERT WITH RAM