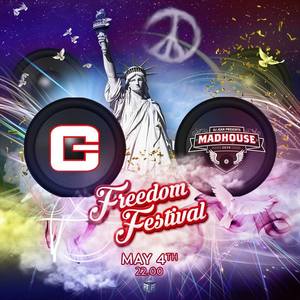 Event Description
Celebrate your freedom with friends at the Freedom Festival!

Saturday, May 4, Grotesque Events is hooking in on a big void in the party agenda. That is precisely why the organizer PT Events thought it would be a great opportunity to organize a fun freedom festival in the Utrecht Central Studios under the flag of âGrotesque Invitesâ in collaboration with DJ Jeanâs Madhouse! And so it happens, two areas, two completely different things; pleasantly combined. The ultimate freedom is the freedom of choice!

It may be clear, PT Events has shuffled the deck of cards well and is very happy to attract the versatile âMadhouseâ formula. No one is unfamiliar with the legendary IT sound of Dj Jean. Block & Crown built name and fame with masterful reworks from the biggest disco hits. And everything that makes this line-up even more interesting follows from the rich club history of Erick E and Mark van Dale. Add to that the popular Spider and Eric van Kleef and you know that musically it must be covered on the 4th. It's too easy to say that "this is really going to be a madhouse". No, we're not going to say that! We would rather remind you of the super atmospheric Kings of Clubbing area in the Maassilo last December. Whoever was there knows enough. It was insane !

It is not really news that Grotesque guarantees a night with the best in various Trance. It only becomes surprising when it appears that the from origin more trancy organization is taking courage to flirt an evening with the pumping beat machine from Madhouse. Unpredictable nights-out often prove to be the best. On the Grotesque side, at least a versatile programming is ready for you. With Dutchies Menno de Jong and David Gravell. Kris OâNeil is flying over from Denmark to open this amazing night and from Poland we have Arctic Moon to close it. The International headliner will be announced by the end of April

Are you âPure Tranceâ ? Then Saturday May 4th is a great moment to celebrate that you have allowed yourself to decide!

The first 250 "Blind" tickets were sold within a week. Do you still want a cheaper ticket? Buy now 1 of the 150 available "White Dove" tickets for only â¬ 25 (ex fee). "Lady" Tickets are also available for â¬ 46 (ex fee). On this ticket you enter with a female friend through a separate entrance. Go to the Facebook Event page or the PT Events Website for more information.
Buy Tickets
Map
Edit