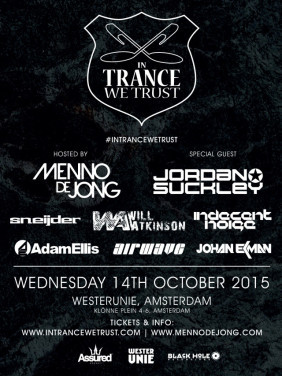 In Trance We Trust @ ADE

Not long after the first official In Trance We Trust night at Avalon in Hollywood the famous Dutch Trance brand now announces it's debut at Amsterdam Dance Event 2015. The event will be held at one of Amsterdam's most characteristic venues, Hotel Arena, on Wednesday October 14th.

Since taking over as A&R manager of In Trance We Trust Menno de Jong has taken the label to new heights, adding an impressive list of talent to the roster, mixing the 20th anniversary edition of the In Trance We Trust mix album series together with Sneijder and signing off on the first branded events around the world. On this particular occasion he invites some of the label's finest talent joined by various special guests.
Buy Tickets
Members Who Attended: 1
Map
Edit