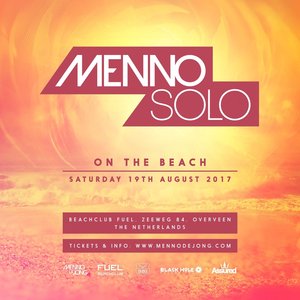 Event Description
After the magnificent 10 Year Anniversary of Menno Solo at Westerunie in Amsterdam, Menno de Jong is now taking the concept to the sandy shores of The Netherlands again. A brand new edition of Menno Solo â On The Beach will be held on Saturday August 19th at Beachclub Fuel in Overveen. Be sure to expect the best in progressive, tech, psy and trance while you dance until the sun sets over the beautiful beaches of Bloemendaal aan Zee.

So far 2017 has been a great year for Menno. He started it off with a bang celebrating the 10 Year Anniversary of Menno Solo at Westerunie in Amsterdam. During this special celebration, the very best of ten years Menno Solo came together in one great production with a mesmerizing trance classics set by âMr. In Trance We Trustâ himself. Since taking over as A&R Manager of the In Trance We Trust label, Menno de Jong has taken the brand to the next level, releasing a series of chart-topping trance gems such as âAhimsaâ, âAbhyasaâ and âSet To Sailâ. Massive productions like these ensure that both new and longtime trance fans are in for yet another great edition of Menno Solo â On The Beach on August 19th.