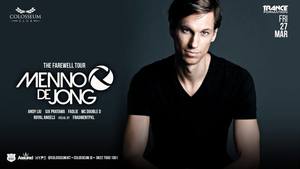 Event Description
THIS EVENT IS POSTPONED.

As one of the most beloved artists in the trance scene, Menno de Jong has graced the stage at clubs and festivals around the world while releasing countless tunes over the past 20 years. Whether it was at In Trance We Trust showcases or performances at top tier festivals, he regularly won crowds over and gave fans plenty of memories along the way. Now, heâs announced that this upcoming series of shows will be his final run as a DJ.