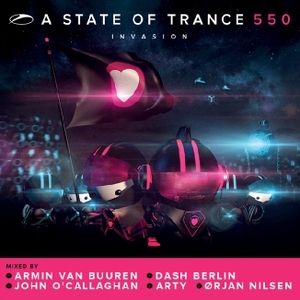 A State Of Trance 550: Invasion

Bringing the unique atmosphere of the events and gathering that strong feel of unity from a loyal following of worldwide music lovers, is the official A State of Trance 550 album. Including mixes by Armin van Buuren, Dash Berlin, John OâCallaghan, Arty and Ãrjan Nilsen it celebrates 11 years of extraordinary dance music. This is A State of Trance 550.

In music history, March 2012 marked a special global happening: A State of Trance 550.It were 6 events in 5 different cities, divided over 4 weeks that brought together 11 years, 25 million listeners and 550 episodes of A State of Trance, the radio show of Armin van Buuren. Gathering music lovers from all across the globe and uniting them through events and live worldwide broadcasts, made this an unforgettable highlight for electronic dance music. Some of historyâs greatest dance classics were premiered in the A State of Trance show and still rule the dance floor today. Youâll find these, amongst brand new tracks, on âA State of Trance 550â.

5 CDâs, mixed by 5 of the worldâs biggest or most promising DJâs, all with their own sound and character. Armin van Buuren, the mastermind and founder of A State of Trance, arguably the most popular dance radio show on the planet. Dash Berlin, the fastest rising producer and DJ of the past 5 years. John OâCallaghan, the number one DJ and producer of Ireland, known for his relentless energy. Arty, one of the youngest and fastest growing DJâs and producers of 2012. And last but not least; Ãrjan Nilsen, a long time favourite of Armin himself, known for his incredibly diverse sound.

Enjoy 5 CDâs and 5 different mixes of only the biggest ASOT classics, ASOT 550 highlights and brand new hits. The one thing uniting the mixes of Armin van Buuren, Dash Berlin, John OâCallaghan, Arty and Ãrjan Nilsen, is their passion for quality music. And thatâs exactly what all A State of Trance lovers share.
Like Edit