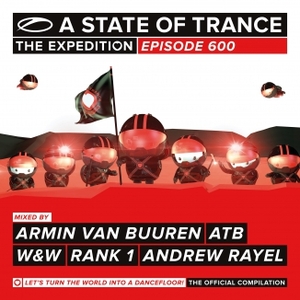 A State Of Trance 600: The Expedition

5CDâs, mixed by 5 of the worldâs leading names in EDM, all with their own sound and character. Armin van Buuren, the one true mastermind behind the A State of Trance brand and the flag bearer of the ever-evolving trance movement. ATB, the German legend that managed to maintain on top for more than 20 years. Rank 1, arguably the most talented producer and DJ duo in The Netherlands and responsible for some of EDMâs biggest classics. W&W, the fastest rising duo in dance land, leaders of the next generation. Andrew Rayel, todayâs promise for the future of trance.

Altogether, theyâll take you on a ride into the past 12 years of A State of Trance. From the big classics to the future ones. Despite their differences in sound, thereâs one thing that binds the mixes of Armin van Buuren, ATB, Rank 1, W&W and Andrew Rayel: love for music. And that unites us all.
Buy Like Edit