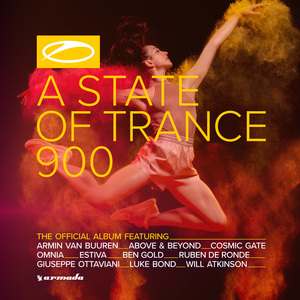 A State Of Trance 900 (The Official Album)

With a grand total of forty records, âA State Of Trance 900 (The Official Album)â ties in perfectly with the new milestone and the ASOT 900 events set to take over the globe throughout the year of 2019. Including this yearâs anthem, âLifting You Higherâ, in addition to phenomenal cuts from the likes of Above & Beyond, Armin van Buuren, Ben Gold, Cosmic Gate, Estiva, Giuseppe Ottaviani, Luke Bond, Omnia, Will Atkinson and more, the album is exactly what the loyal Trance crowd hoped for: an exhaustive selection of tracks that shows that Trance music is here to stay.

On February 23, âA State Of Trance 900â was held in the Jaarsbeurs venue in Utrecht, the Netherlands, turning the massive event into a global gathering that spanned no less than five stages, a little under forty artists and a delirious crowd of 35,000 strong, making it the biggest Trance event in the world. The event was already sold-out weeks in advance. But fans who weren't able to purchase a ticket could watch the event's full livestream on ASOT.tv, which consisted of a video livestream of the mainstage and the Who's Afraid Of 138?! stage, and audio livestreams of the other three stages.
Buy Like Edit