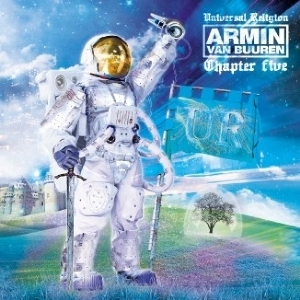 The Dutchman breathes music, and has been at it for more than 15 years. A lot has happened since the release of Universal Religion Chapter 4 in the summer of 2009. His fourth artist album âMirageâ saw the light of day, along with the accompanying âArmin Only â Mirageâ world tour. The 10 year anniversary and 500th episode of his A State of Trance radio show was celebrated with 5 events across 5 different continents, divided over 5 weeks. All events were broadcast live, uniting millions of listeners, sharing their passion for music. Another exciting new happening in his musical career, is his residency in the world-famous club Space on Ibiza.

Armin van Buuren honours tradition and gives it a new spin at the same time. Universal Religion Chapter 5 presents two special live recordings from his gigs at Space. Let your senses be taken by exclusive tunes and remixes, feel the vibrant energy of the crowd and enjoy Arminâs unrivalled mixing skills, as he introduces you to a new, musical Chapter. Not only does Universal Religion Chapter 5 indulge you with 2 brand new Armin van Buuren remixes, a new Gaia production and Arminâs âBruteâ collab with Ferry Corsten, it also takes you in with the beats of BT, Shogun, Ashley Wallbridge, Paul Oakenfold, Alexander Popov, Daniel Kandi, Re:Locate vs Robert Nickson, Andy Moor, John OâCallaghan and many more.
Like Edit