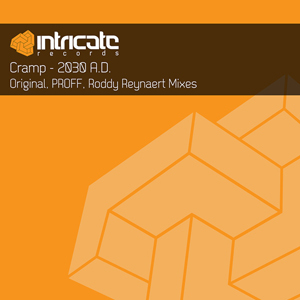 Description
Crampâs latest work, Â«2030 A.D.Â», was signed to Intricate Records and will see the light of day in April 2013. The package will include remixes by Roddy Reynaert and PROFF, plus the original version, of course.

The debut release by Ilnaz Tarkhanov on Intricate Records was entitled Â«BombayÂ» and put the listeners from heat to feet into Indiaâs revel of colour and ethnic motives. The newest one by Ilnaz, Â«2030 A.D.Â», in contrary, brings us into the far distant future, where technology has control over the entire way of life and the daily tempo is so high. Listening to this track gives similar experience like driving on a highway which is intercrossed with dozens of side roads. Huge steel-and-glass skyscrapers are passing by; cars are honking the horns to drive through. Although in all fairness, you will notice the influence of the East in this production. In the middle of the track is an unbelievably beautiful breakdown, like we stop the movement in front of the red light to think about the temporality of life and the greatness of the future city. But this lasts only a minute, and the race goes on, taking the imaginary car far and further away along the highway. Roddy Reynaert has captured all the original ideas of Cramp and did a remix which is more dancefloor friendly and futuristically-designed, packed with cosmic various sounds.

This is, of course, not that Â«French Eric PrydzÂ» we used to know â Roddy and his debut single on Intricate Records, and Cramp as well is also Â«back from IndiaÂ» and has shown us his true techno side in Â«2030 A.D.Â», but with a part of soul. The second remix was made by one of the labelâs co-owners, PROFF. Being inspired by his recent Italian vacation, Vladimir slightly changed his sound but mostly remained true to his warm and juicy style which is still so easily recognizable.
Like Edit