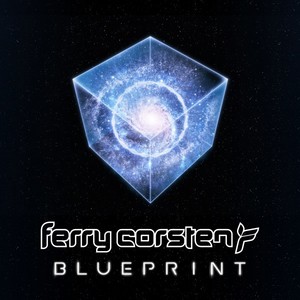 May 2017 marks the arrival of a new album from one of electronic musicâs most perennial pioneers. A true labour of love, given his passion for discovery science and space and time, Ferry Corstenâs latest studio project âBlueprintâ has set him on course for his own discovery as a producer, artist and storyteller. And he wants you to join him on this journeyâ¦

In a voyage to design something that would illuminate beyond just the dancefloor, Ferry has pieced together a truly remarkable piece of work in this enthralling concept album that puts focus on a narrative of the existence of mankind and our desire to reach beyond on our own world, for love, for curiosity, for the exploration of our existence?

Written into the musical code of the album we learn that from the deepest edges of space, âThe Drumâ can be heard, endlessly repeating, without any understanding as to its reason or purpose. None of the greatest minds on earth or the governmental superpower can decipher its existence. Except one. As the listener journeys from the opening track to the last the album chronicles the voyage of Lukas and Vee as a new world is opened up to not just the mind but the heart. But why did they send Vee? Is she the first contact or something more nefarious? As Lukas uncovers the truth, he learns of a far greater truth, one that has grand implications for all mankind.

Fans can join Ferry Corsten and the boundless creativity of âBlueprintâ by unlocking the world beyond during the pre-order sale. Through sharing activation on the official âBlueprintâ website, fans will access chapters from this intergalactic voyage and discover the musical message contained within.

From the opening title track - âBlueprintâ - this sci-fi inspired release synthesizes an interstellar journey wrapped in wonder, love and the unknown. Through the stories of the albumâs protagonists Lukas and Vee, listeners are propelled into a cinematic voyage that is story-driven by narration, whilst encapsulated in a musical craftsmanship that will have its audience in awe. From the enchantingly uplifting tones of Gouryellaâs âVenera (Veeâs Theme)â to the stargazing splendour of âEdge Of The Skyeâ, featuring HALIENE, Ferry has pieced together an album that tonally ignites all the right sentiment. Gravitated by the space odyssey of âA World Beyondâ the album is thrust into a weaving metronomic launch with âTrustâ, as Blueprint manages to combine masterful musical strokes of pure brilliance with several moments of gargantuan seismic textures. The full tracklisting offers tense, emotive pieces, aligned with industriously rich and strikingly, grand electronic space jams; âBlueprintâ offers the listener an unknown world to explore whilst undeniably showcasing a vision never before heard from Ferry Corstenâs previous studio output.

This fifth album instalment from Ferry Corsten is his boldest and most ambitious to date. A conceptual long player that stretches far beyond its musical foundations and into the galaxy with a futuristic narrative. âBlueprintâ cites references from esteemed authors of the Sci-fi genre such as Hugo Gernsback and HG Wells, and delves deep into a storyboard crafted by the minds of David H Miller (of House Of Cards and Rosewood fame) and Ferry himself, giving the listener a cosmic adventure of truly interstellar proportion â voiced by Campbell Scott known for Hollywood box office hits such as The Amazing Spider-Man.
Buy Like Edit