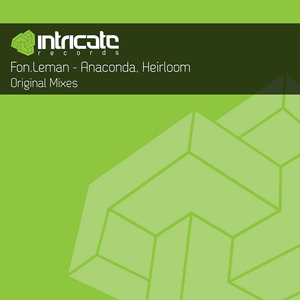 Description
Fon.Leman, a Russian producer from the Urals, has completed his work on the second EP for Intricate Records, it will feature two newest tracks, Â«AnacondaÂ» and Â«HeirloomÂ», the release date is set for early March 2013.

Alexey Mazhaev, also known as Fon.Leman, is not a newcomer to Intricate Records. His track Â«Muse CollectorÂ» appeared on the labelâs summer sampler in mid-2012, was immediately noticed by the majority of progressive sound fans and touched their hearts. Fon.Leman consolidated this success with a debut EP which included Â«Muse CollectorÂ», Â«Converted UniverseÂ» and Â«Mental CellÂ». Six months later we are ready to announce that Alexey has spent all the time in studio, diligently recording new original works. As a result, the latest singles on Arrival Recordings have been extensively supported by Jaytech, Boom Jinx and Above & Beyond. In November 2012 Fon.Leman launched his own podcast Â«Dimension & PerceptionÂ», which already amounts to four episodes. As a Christmas gift to all his listeners, Fon.Leman put a free five-track package entitled Â«Free Christmas EPÂ» for everyone to download, and also shared a track Â«PulsarÂ» a bit later. Moreover, not without a reason he was nominated for the Â«Best Producer of 2012Â» by Silk Music label. In January 2013, Fon.Leman published a teaser with some previews of his upcoming releases, where you could have noticed a track which will complete the catalog of Intricate Records in March. The track was named Â«HeirloomÂ», it will be backed up with another original one, Â«AnacondaÂ».

Like before, this is high quality progressive by Fon.Leman â smart and lively rhythm, juicy groove, proper amount of vocal samples and extraterrestrial sounds. Itâs no coincidence that Alexey was already called Â«new PrydaÂ» by the followers for his substantive and unconventional creative work.
Buy Like Edit