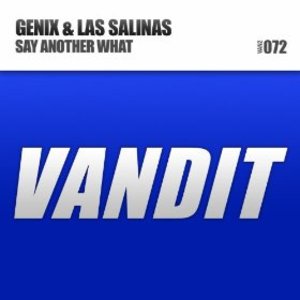 Genix & Las Salinas - Say Another What

After âStone Ponyâ, âChipsy Kingsâ and âBada Bingâ Las Salinas are once again ready to break the chart. âBada Bingâ which was released only weeks ago has been supported by various artists such as Paul van Dyk, Armin van Buuren, Ferry Corsten and Markus Schulz in their weekly radio shows. The overwhelming support the Israeli duo got during the last months might be groundbreaking for âSay Another Whatâ.

With Genix the two VANDIT residents have found the right fresh talent to work alongside of. His cutting edge productions and DJ sets have taken him across the globe playing the best clubs and festivals shoulder to shoulder with the Trance A listers. Genix himself describes his sound as âan unique fusion of Tech, Trance, Progressive, House and Electroâ. Itâs hard to define his sound but thatâs what makes Genix so exciting.

Recently premiered on Paul van Dykâs VONYC Sessions âSay Another Whatâ is the epitome of a perfect symbiosis of two talented artists. The highly energetic leads combined with emotional synths and an even more thrilling break literally makes you tilt back your head, close your eyes and raise your hands.
Buy Like Edit