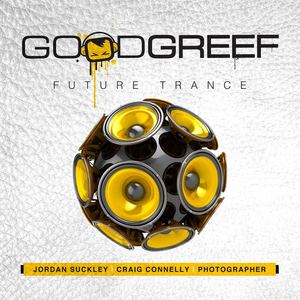 Now, with a squad of their most trusted DJ master-blasters ready to turn the speaker cables a fierce shade of white, Goodgreef are straight-up stoked to deliver a mix-comp thatâs gonna put summer 2014 into overdrive. Stepping up for the occasion, Messrs. Jordan Suckley, Craig Connelly & Photographer have clubbed together a 3-disc-strong mix-collection, featuring some of the toughest, most deadly current and upcoming trance music available to man, beast or DJ.

âGGFTâ also comes locked, cocked and ready to rock with studio-ware from fast moving future heroes like Sneijder, Bryan Kearney, Will Atkinson, Johan Ekman, Skytech and Tangle, as well as much from its own mixing troika. From tech to tough, acid to uplifting and on to flat-out hard, its 3 discs will quench the thirstiest of trance-head appetitesâ for floor destruction. Hold tight to the safety rail now - this is âGoodgreef Future Tranceâ!

Now probably the name most quickly associated with Goodgreefâs DJ cabal, Jordan Suckley is first up to the mix forge.

The frontend of his mix sees him lock in a big 1-2-3 of his own recent productions, as âContaminatedâ, âAccessâ and Eddie Bitar co-production âCentipedeâ ensure that energy flowsâ¦ and blood pumps.