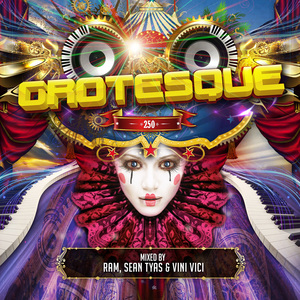 Arguably their most impressive show/experience to date, three of â250âs DJs have teamed up to commit all the energy, excitement and electricity of the night to a triple disc mix-comp. Stateside bastion, Sean Tyas, Vini Vici - one of the sceneâs fastest risers of 2016 and the Grotesque kingpin himself, RAM serve âGrotesque 250â, the album. Bringing the night vividly back to life, over 3Â½ hours and across 48 tracks the three spinners have summoned the best, most seismic, most â250â characterizing trance available!

Precision-mixed across its discs, youâll find releases & reworks from a host of the sceneâs most revered names, Andy Moor, Mark Sherry, Astrix, Robert Nickson, Ace Ventura and Ronski Speed amongst them. Thereâs much from the nu-guard too, with the latest studio-ware featured from (deep breath!) James Dymond, Allen Watts & Amir Hussain, Daniel Skyver, Matt Bukovski, Chris Metcalfe, Adam Ellis + dozens of others. Leaving their own individual marks on the discs too you can count on plenty from the production desks of Sean, Vini Vici and RAM too.