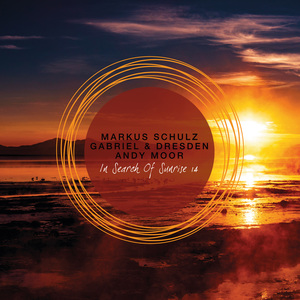 In Search Of Sunrise 14

Well call off the search, the Big Kahuna of all trance compilations, (the one that MIXMAG no less hailed âthe greatest trance series of them all!â) is on the comeback track. And itâs had a bit of a refit!

Following the mix tenures of TiÃ«sto and Richard Durand, series guardians Black Hole have shaken up its system and retooled the ISOS DJ dynamic. Theyâve secured the services of three spinners whose credentials in the realms of sunrise soundscaping are beyond question. Markus Schulz, Gabriel & Dresden and Andy Moor have all picked up the ISOS mix mantle and have each embarked on their own forays for sunrays. Cumulatively this has resulted in an album that draws on the music of many a mainstay - Above & Beyond, Dakota, Cosmic Gate, Solarstone, Ferry Corsten, Paul Oakenfold and Aly & Fila among them. Naturally this is assimilated into much of the DJs own studioware (often exclusively) to deliver you an immaculate break-oâdawn, summer summarising soundtrack.

Weâve all been there, and many times over. That singular moment when, for the first time, the sky above the party lightens, the DJ catches its thematic thermal and you have element & music in perfect synch. There are few feelings to beat it and encapsulating that alchemy has been the unending quest of âIn Search Of Sunriseâ.

First to make his pitch is a genre polymath for whom no trance discipline is beyond mastery. Markus Schulz begins his quest with the translucent âHymn of the Replicantâ - an exclusive overture born of recent studio sessions with Jam El Mar. From there it cruises on to Above & Beyond & Justine Suissaâs âCold Feetâ, lifts again with âSomething About Youâ (his Dakota pairing with Arkham Knights), before marking its median through Solarstoneâs homage to âMidsummer Nightsâ. Travelling onwards it hypnotises with the mantra of Corsten x Oakie collab âA Slice Of Heavenâ, before delivering new perspectives (from Johan Gielen and Elevation) on Schulz/Suissa classic âPerceptionâ and Moogwaiâs âViolaâ.

Like ISOS itself, Gabriel & Dresden have done their own fair share of rematerializing of late. Josh & Dave transition darkness to light through the likes of Nadenâs epic âSubmersionâ, the ethereal vocalism of Eelke Kleijnâs âHomeâ, elegiac elegance formed by Lucas Rossiâs âA Part of Myselfâ and Estivaâs sonorous âSpace Dustâ. Denoting daybreak, the pair brilliantly sequence a run of their own material. Their recent G&D reworks of Dirty Southâs haunting âIf It All Stopsâ and Above & Beyondâs âIs It Love?â prefaces their most recent single âOver Oceansâ and Cosmic Gateâs exceptional revision of âOnly Roadâ.

ISOS:14 is not âDJs delivering their âtakesâ or âinterpretationsâ on the originally-modelled-by-TiÃ«sto soundâ. This is the real deal - a wholehearted connection, direct to its original vision.
âSunriseâ dawns again June 29.
Buy Like Edit