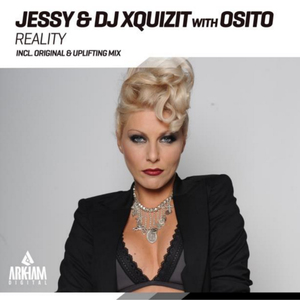 Description
For those of us who were into dance music back in the mid-00s, there are several tracks that we remember being everywhere. We couldnât go to the gym or shopping for clothes without hearing them. Every time we went to the Virgin Megastore when we went to the Dance section we would find compilation CDs and those songs were there too.

Jessy De Smet is an author of one of those iconic songs. âLook At Me Nowâ became a breakout hit in Belgium and the UK.

Her latest release is âRealityâ, a collaboration with Trance producer DJ Xquizit and featuring backing vocals by OSITO. The track features a positive message that highlights the fact that the first step in making your dreams a reality it to truly believe. Believe in yourself, believe in the dream, and believe that you have the capacity to make it possible.

While the original mix combines the Trance found in the musical DNA of all things DJ Xquizit with a modern âfuture bassâ main drop, but the Uplifting mix is the perfect vocal trance tune. Starting off with a killer bassline and acids and getting your foot to tap, once the vocals come in, talking about the wonders in the natural world, you canât help but smile when you realize how well the message of the lyrics combines with the âupliftâ of âuplifting tranceâ. Once the main synth line takes over, you wonât be able to help but get up and dance your ass off.

The collaboration came after an introduction by Christophe Chantiz, the man behind the project âIan Van Dahlâ at last yearâs Amsterdam Dance Event. While both artists had deep roots in the Trance scene, a mutual desire to break out and explore other scenes helped them connect.

Jessy has a long history. Starting off in 1995 as a member of the Belgian dance act The Mackenzie ft. Jessy. After having won a TMF Award for Best album in 1998 and several hit singles, Jessy decided to pursue a solo career in 2002. âLook At Me Nowâ kicked it off and along with her collaboration with Mickey Modelle, âDancing In The Darkâ, both tracks managed to enter the UK Singles Chart.

DJ Xquizit, on the otherhand, is more of a recent success. His DJ career might have been going strong since 1999, but it was his hit track âFirst To Goâ that put the trance scene on notice. Originally signed to GO On Air, the track was included on Giuseppe Ottavianiâs volume of âF15teen Years of Goodgreef: The Anthems Collectedâ and received considerable support from Trance DJs, culminating with the track winning âFuture Favoriteâ on A State of Trance 723.

He followed his ASOT support with a collaboration with Mino Safy, which along with receiving another ASOT support it was also featured 3 times on Group Therapy with Above & Beyond. More recently he has had additional hits including âSo Coldâ in collaboration with Christina Novelli and his remix of 2002âs trance anthem âDid I Dreamâ by Lost Witness, which on top of being featured on A State of Trance, was Xquizitâs and Arkham Digitalâs first Billboard entry.

Another newcomer is Dylan Proesch, a.k.a. OSITO. A pop vocalist who has been the voice behind most of Xquizitâs top selling tracks, including âParadiseâ by DoubleV & DJ Xquizit feat. OSITO and released on Sonyâs Disco:wax sublabel, âDear Gravityâ which quickly reach 1 million streams on Spotify thanks to being featured for months on Spotifyâs Mint playlist, and âSet Yourself Freeâ, another track heavily featured on Spotify, currently sitting at over 500k streams. He also collaborated with DJ Xquizitâs alter-ego, Xavian, on âKaleidoscopic Daydreamâ, released on In My Opinion (Armada) and sitting at over 150k streams thanks to a two month stay on Spotifyâs Trance Mission playlist.

Seeing release on DJ Xquizitâs own Arkham Digital, a sublabel of the famed IHU Music Group, on 3 July, with a forthcoming remix by DJ Mag Top 100-charting artists DJs From Mars on 23 July. Available on all major download and streaming platforms. You can also check out the lyrics video on Arkham Digitalâs YouTube channel and Facebook page.
Buy Like Edit