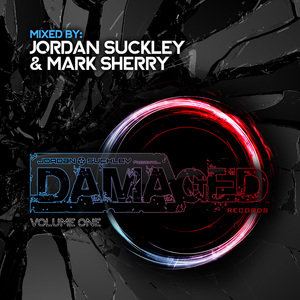 From their running start in Feb last year, it became Beatportâs #1 trance label debut for 2014 and is now one of BPâs 15 bestselling labels within the genre. Further, Damagedâs put radio playlists on notice, floors on lockdown and hatched - in the blink of an eye - a radio show and a string of sold-out tour nights.

The MVP at its A&R controls, the agent provocateur Damaging the radio airwaves and the firebrand calling the audio shots at the fast-emerging marqueâs club nights is Jordan Suckley.

This month the young Liverpudlian hammers the next piece of his jigsaw into place, injecting Damaged sonic psyche into an explosive, propulsive double CD mix-compilation. Joining Jordan in this quest (and equal to the task) is Mark Sherry - a man every bit as well versed in putting the capital âFâ in âFierceâ!

Locking & loading 38 tracks from tranceâs bloc, each has one thing in common: tough comes hardcoded! âDamaged Records Volume Oneâ features much from the labelâs upcoming S/S collection, including an abundance of floor-whackers from Jordan and Markâs own studios. Thereâs also speaker shredding material from from big guns like Markus Schulz & Max Graham and the latest rolling trance freight from Suckley & Sherry faves like Thomas Datt, The Space Brothers and Mario Piu. Nu-skoolers are equally well represented too, with turbine gear from the likes of Allen & Envy, Solis & Sean Truby, Future Disciple, Alex Di Stefano, Lostly and many more besides.

On the first year of Damaged Records and the release of the labelâs first mix-comp, Jordan says: âI'm very happy with how Damaged has developed in the last year and this compilation is a real snapshot of the sound I'm pushing in clubs all over the world!â

Frontend of the second disc, Scotlandâs Mark Sherry mixes up music from newcomers & established producers alike. The sonic equivalent of a rhino charge, itâs flush with no-nonsense tech-trance steel from young guns like Alex Di Stefano and Jamie Walker, which dovetail into tracks like âThe Codeâ from trance grandmaster Mario Piu. Further in Markus Schulz and Max Graham lend their gravitas, as Mark daisychains his remixes of âRemember Thisâ and The Evil IDâ. More Sherry floor flaming is right around the corner with âLet It Comeâ - his killer collab with The Space Brothers, âVengeanceâ (in two different mix flavours) and his recent Beatport chart scaling re-envisioning of the classic âThe Pillars Of Creationâ.