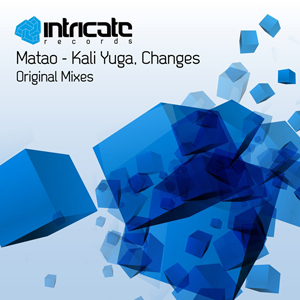 Description
June 2012 will bring the followers of Intricate Records the next release by Matao, Russian producer from the city of Astrakhan, containing two brand new tracks, Â«ChangesÂ» and Â«Kali YugaÂ». Marat Dzhumanjazov, the person behind this alias, has already made his first contribution to the labelâs catalog, an outstanding remix of Â«Flying SpiralsÂ» by Sergey Tkachev and Alexey Sonar, our debut release. It is no surprise that we quickly noticed Maratâs talent and offered a slot to him, Matao scheduled production of two original tracks for us which now will be featured together on one record.

Matao is one of the most promising and quickly growing Russian producers of the Progressive House scene; during the first year of prolific career, he caught attention of such labels as Macarize, Nueva Digital, Arrival, Terminal4 and Silk. Â«Music is such a phenomenon which was not yet studied to the full extent, â Marat explains his point of view. â There is something special in every existing sound wave, what deeply penetrates our hearts. My creative work is a number of attempts and efforts to find the ultimate and unbeatable recipe of happiness, and ingredients here are rhythm, harmony and melodyÂ».

Those efforts are traceable in his latest productions, Â«ChangesÂ» and Â«Kali YugaÂ», which brim with ethereal lightness and easiness of perception from the very beginning, but at the same time the tracks are saturated with an unbelievable charge of summer energy which is explicated in xylophone hammer sounds, piano parts and tender vocal samples. Rumor has it, Kali Yuga (according to Hinduism, itâs the century of discord and evil) is offered to a man for him to be able to see the Sun inside himself. Well, Maratâs productions are an excellent support for that.

The forthcoming release of Intricate Records catalogue, Â«Changes / Kali YugaÂ» by Matao, is scheduled for June 2012. It will be available for public on Beatport.
Like Edit