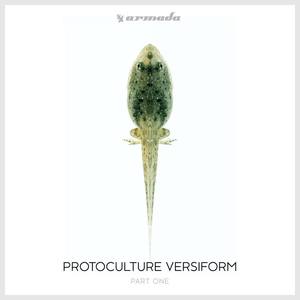 Description
Making music is about more than just creating monumental records or floor-cracking speaker busters. As much as any other art form, itâs about growth, about sonic evolution, about wanting to push the envelope for the sake of creative freedom. To change and to adapt is to become better, and thatâs exactly the notion South Africaâs leading DJ/producer Protoculture has taken to heart in part one of his fifth artist album: âVersiformâ.

Helmed by breathtaking records such as âThe Descentâ â a top favorite to Armin van Buuren himself â âSecret Weaponâ (feat. Sue McLaren) and âThirty Three Southâ, âVersiform Part Oneâ makes clear in no uncertain terms that Protoculture hasnât sit still in the studio. Throughout the nine-piece album and the shimmering Vocal Trance cuts and instrumental monster tunes it harbors, he centers an amazing new side to his production skill thatâs bound to appeal to the Trance crowd in exciting ways. Armed with a freshly developed sound and new means of exploring the dance music realmâs uncharted territories, he shows to everyone out there that progress is power.

While part one of âVersiformâ encompasses Protocultureâs melodic and more gentle, progressive productions of the last year or so, part two sticks to the theme by shifting styles and delving into something different. As it stands now, âVersiform Part Twoâ focusses on the underground side of things, and will therefore prove a little tougher and darker.
Buy Like Edit