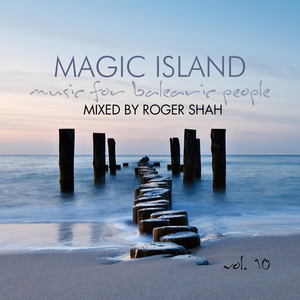 Naturally, over the duration, its band of music-makers have grown comparatively, but so too has the artistic camaraderie that exists between them. Cooperating evermore as the series has advanced, the Balearic mindset that Roger instilled in the opening albums has brought together a sizable troupe of inter-collaborating creators.

âMagic Islandâs tenth volume naturally marks a new level high in its accent, with music from a wealth of both the new and established. In the latter regard youâll find skilled âIslandâ trippers like Brian Laruso, Clarks, Rafael Osmo, Noah Shah, Bob Memphis, Raul Pablo Sanchez, David Broaders, Pierre Pienaar, Sergey Shabanov and others returning with their best sun-touched sonic-tonics. Youâll also musically-meet first-timers like Yelow, Sunflare, Cores & Zaffarano, Dominik Novak and Andy Cain, alongside more familiar names including Dennis Sheperd and Kristina Sky. Roger himself has spent the interim between âIslandsâ 9 & 10 working on a wave of new material, that tonally spans the releaseâs lounge-through-club spectrum. With no fewer than 15 tracks from the man and his aliases, new tracks from High Noon At Salinas, San Antonio Harbour, Balearic Session, Global Experience and (naturally!) Sunlounger abound.

So far, so Magic then, but to mark its big 1-0, Roger still also wanted to give the release something it hadnât had before. With its intrinsic musical style very much its USP, this presented something of a Catch 22. It couldnât become less Magic Islandâ¦ only more! It was a conundrum he ultimately resolved by expanding the release to take in a third disc/mix. For it he has taken some of his most beloved âBalearic Peopleâ moments from the last 12 years and worked them into the most highly concentrated âMagic Islandâ listening experience yet!
Buy Like Edit