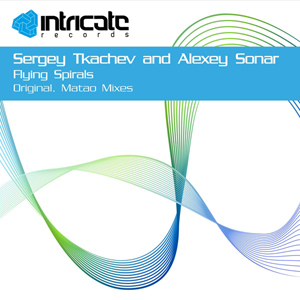 Description
The very first single of newborn Intricate Records is 'Flying Spirals' including the original version of a track collectively written by Sergey Tkachev and Alexey Sonar and a remix made by Matao, a producer from the city of Astrakhan. The idea to create a common track was born on Alexey's birthday. Sergey showed a rough draft, which guys suggested to complete together. The final result of these collective efforts is an authentic chronicle of a musical flight. The first part describes the firing of some flying machine, takes the listeners skyward high while mantling them with smooth motives of progressive and precisely strong beat, gradually developing the main theme directed to more trance-alike sounds. The second part takes the audience even higher over the horizon and literary makes it fly in the skies surrounded by the cosmic melody and the same precisely strong beat, slowly returning everyone back to Earth by the end of the track. The remix by Marat Dzhumanjazov, better known on the club scene under the alias Matao and previous works released on Nueva Digital, Terminal4, Silk and Macarize, by contrast, significantly diminishes the energetic rush of the original version and gives priority to smooth and magical temper, which will be far more suitable for the home atmosphere rather than for the dancefloor. 'It has been a great pleasure and a great honour to remix 'Flying Spirals', -- Marat confesses. -- Furthermore, I am a fan of what Sergey Tkachev and Alexey Sonar have been doing for years. Doubtless, the original version of this track written by my favorite producers will move and shake a score of dancefloors!'
Like Edit