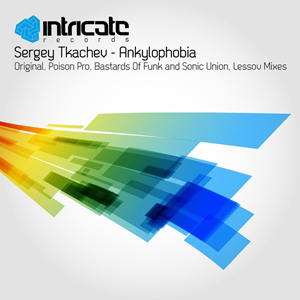 Description
The end of April 2012 is the point when Sergey Tkachevâs most patient and devoted fans will be rewarded with his single Â«AnkylophobiaÂ», renewed and supplied with extra versions this time. It will include Sergeyâs original productions, two brand new remixes by Lessov and Sonic Union, as well as an updated interpretation by Poison Pro.

The path to see the light of day was quite thorny and long for Â«AnkylophobiaÂ». Initially released on the Russian label Flash Records in October 2011, the single consisted of the original mix and Poison Pro remake, but due to unrevealed reasons it was removed from all Internet music shops. One would think, after this removal there was no chance to see Â«AnkylophobiaÂ» available somewhere else on digital distribution, but the fortune was gracious to Sergey. The single was not only saved from sinking into oblivion, but even got second wind with the astonishing remixes by the young Canadian producer Lessov and Swedish heavyweight, Lowbit label owner Sonic Union. Intricate Records became the secondary residence for Â«AnkylophobiaÂ», while Sergey Tkachev recently joined the labelâs residents team.

While the original mix and the remode-version by Poison Pro can be confidently labeled as classic progressive house, the remixes by Lessov and Sonic Union are quite the contrary and have those special deep and tech house peculiarities. Now, after six month from the initial release date, having passed through fire and water, the renewed single entirely justifies its unusual and remarkable title (ankylophobia is fear of immobility).

The fourth single of Intricate Records catalogue, Â«AnkylophobiaÂ» by Sergey Tkachev, will be released on April 30, 2012. It will be available for public on Beatport.
Like Edit