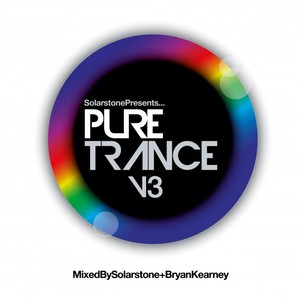 Pure Tranceâs has again been a rolling boulder of momentum over the last 12 months, with evermore DJs heeding the call of the PURE! The press have been kindâ¦. MIXMAG magazine called the first compilation âhighly impressiveâ and its second âa huge step up againâ. Last month, in a key feature, DJ Mag UK cited Pure Trance as a major catalyser in âtrance staging a major comebackâ. The fans have been kinder yet, flocking to Pure Trance events at WMC in Miami, ADE in Amsterdam, Ibiza and dozens of other electronic music metropolises around the globe.


Now, in its third year, the evermore-established origin-trance series marshalsâup for its regular end-of-Oct release spot. Following co-mix tenures by Orkidea, and last year Giuseppe Ottaviani, in 2014 itâs younger-gun Bryan Kearney who joins Solarstone at the controls. In the search of the P.T. chosen, theyâve forensically slid 1000s of tracks under the Pure microscope, finally identifying 37 of the most exclusive uncorrupted and virtuous trance tracks out there. Big name productions passing the clarity check include music from the desks of Aly & Fila, Alex M.O.R.P.H., Thrillseekers, Sied van Riel, John OâCallaghan, Arctic Moon and Ferry Tayle, as well as much from Solarstone & Bryan themselves. As is Pure Trance covenant, the album is as much about the âfuture-perfectâ producers as it is âpresent dayâ legends. In that, it brings music from dozens of nu-bloods: Sneijder, Will Atkinson, Adam Ellis, Standerwick, The Noble Six and Liam Wilson among them.

So whatâs inside the third box, we hear you ask!? Well in short: masses, but more specifically, leading the mix-charge is Pureâs conceptador himself, Solarstone. Early in, he mixes up his Retouches of tracks by Liam Wilsonâ and Artur (âSet In Stoneâ and âRaysâ respectively) with Pure Mix variations of âFlyingâ from Silvermine and Gai Baroneâs âMr. Sladeâ. There are also outstanding sonic crossbreeds, with Winkeeâs âAssassinâ kinetically encountering Solarstoneâs âDark Heartâ, and further in Alex M.O.R.P.H.âs more âSacredâ variety brilliantly interplayed with Sied van Rielâs âGravityâ. There are nods to Pureâs lineage too, with a highly respectful after-touch of Jam & Spoonâs âOdyssey To Anyoonaâ (recently cited by both Solarstone & Armin in the UKâs DJ Mag as 1 of the 10 most important trancers of all time!) and Z2/Neptune Projectâs rework of Oliver âEcanoâ Liebâs immortal âRunâ. With plenty more abound from production hounds like Thrillseekers, Driftmoon, Orkidea and Adam Ellis, the mix runs hot from first beat to last!

On a Purely personal note, Solarstone says: âThe year since Vol. 2 has beenâ¨ a fabulous twelve months not just for the Pure Trance movement, but for the Trance scene on the whole. Bryan and I have dug deep into the record boxes and demo banks, searching for those glimmers & sparks of musical inspiration from both established and previously unknown artists, to bring you an emotive ride through the many shades of the Pure Trance sound.If you have attended anyâ¨ of our Pure Trance events, you will understand exactly the journey upon which this album will take you. Ifâ¨ you have not yet had that pleasure, simply close your eyes, take a deep breath, and immerse yourself in this tapestry of melodies, grooves & emotionsâ.

An origin-trance dedicate, over the last three years Bryan Kearneyâs DJing, together with his Kearnage imprint have propelled him to the forefront of the scene. Brilliantly distilling the sub-genre to absolute purification, his mixes play trancers from neophytes like The Noble Six, Chris Metcalfe, Alex Di Stefano and Will Atkinson off against those of more seasoned operators. The mixâs midsection it heavy with known-names, as John OâCallghanâs âThe Sawâ, Aly & Fila vs. Sneijderâs âFull Throttleâ (and âNubiaâ with Ferry Tayle) and Arctic Moonâs âRevolutionâ all come under his laser. Its climax brings Adam Ellisâ remix of Fred Bakerâs roots return tune âRebirthâ and Bryanâs own, just-finished mix of the title track from US alt-rock vocalist Plumbâs âNeed You Nowâ.

By way of introduction, Bryan says: âMy mix is a representation of what I consider trance to be, versatile, energetic with power and passion. You will get a glimpse of the future of my own label Kearnage with nine tracks produced especially for this album.â¨ I have to once again say thank you to all the producers for providing me with such high quality music. It made the process of compiling this mix so much easierâ.

Puritans, your deliverance from the derivative is once again nigh! âPure Trance Vol. 3â enters the arena October 27th.
Buy Like Edit