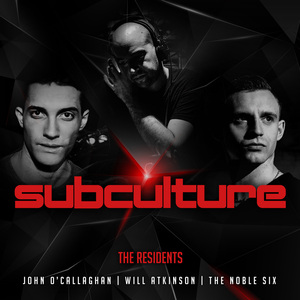 On âSubculture â The Residentsâ, those first four elements unite to form the fifthâ¦ For this release, John is joined for comp mixing operations by bright young talents Will Atkinson & The Noble Six â fast emerging emissaries of Subculture studio & stage. Together they channel the best of the show, label, tours and talent into 3 sensational mixes - each maintaining its own individual audio code, while collectively enshrining the sound of Subculture.

âThe Residentsâ contains music from a wide span of the trance producerâs establishment: Sean Tyas, Aly & Fila, Ferry Corsten, Giuseppe Ottaviani and Arctic Moon to name-check but a handful. Thereâs also plenty from its newer guardâ¦ Bryan Kearney, Sneijder, Neptune Project, Alex Di Stefano Standerwick and others provide a wealth of new, soon-to-be-club-bound fare, as do the mix-protagonists themselves.

Will Atkinsonâs name has been quick to the lips of in-the-know trance-heads for several years now. The young Scotsman bookends his âResidentsâ mix with compilation exclusives like âHarvesterâ and âWith Lightâ, while further locking down the midsection with a big Atkinson 1-2-3 of âSharpshooterâ, âVictimsâ and âIsolatorâ. Elsewhere he skates the mix skillfully between modern day classics like Ferryâs Corstenâs âBeautifulâ, Goa infused sound shafts from Angry Man & Vertical Mode (on âLunaticâ & âAlien Rockâ respectively) and outstanding vocal-ism like âRememberâ from the pairing of Something Good & CAPS.

On joining Subculture â The Residentsâ line-up , Will Atkinson says: âto me, Subculture means proper Trance delivered with class. It is one of a few remaining labels with real quality controlâ. The Noble Six continues: âfor us to be considered residents of a label of Subcultureâs quality is truly an honour!â.

In 2014 Andrew Alexandrov is considerably better known under his artistic pseudonym The Noble Six. The half Romanian/half Canadian producer brings his inherently uplifting floor style to âThe Residentsâ final disc. One sonic high follows another as he seeds 80 minutes of magic with thermal pads, hairs-up harmonies and cascading synths. Noble Six material is in no short supply as âThe Sourceâ intros Andrewâs mix, before the arrival of âTimeâ â his most recent collaboration with regular cohorts Neptune Project. His remix of the Neptuneâs âLost All My Tearsâ (this month hailed by DJ Mag as âthe best trance track of 2014 so farâ) and his âOcean Driveâ collaboration with Chris Metcalfe sees the mix conclude somewhere up in the clouds.

John, Will & Andrew deliver the Subculture enterprise its perfect 2014 closeout. âThe Residentsâ rule from November 17th.
Buy Like
Members who like this Release
Edit