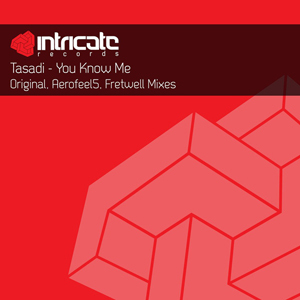 Description
Mid-March 2013 will be a memorable moment for Intricate Records â Tasadiâs debut single Â«You Know MeÂ» will be released on the Russian progressive label. INTRICATE025 will feature the original version of the track plus remixes by Aerofeel5 and Fretwell.

Â«TasadiÂ» is the name abbreviation of Taha Asadi, Dallas-based producer who is active on the electronic dance music scene over 10 years as of today. He wears sunglasses and a knitted cap, his T-shirts are always untucked. At first look, one might think Tasadi is a rapper from the slums, but this urban-style dressed guy does not produce any rude recitatives, but heart-touching trance and agile progressive. Taha runs his own label, Sedna Recordings, which joined the MRC company some time ago and is now under the same management as the prominent Hooj Choons and Lost Language. Tasadiâs discography is quite impressive, the highlights are his artist album Â«The SystemÂ», compilation series Â«The AscensionÂ», the remixes for Gareth Emery, Solarstone, Tilt, and, of course, his own productions released on a number of imprints including Tone Diary and DeepBlue as well as Cloud 9 and Curvve.

Tasadi knows musical Russia quite well, he is not a newcomer on this territory â his remix album Â«The System RebootedÂ» and Â«The AscensionÂ» compilations include various works by many Russian producers including 4Mal, Existone, Vadim Zhukov, Rinat Shabanov, J-Soul and even one of Intricate Records co-founders, Moscow-based Sergey Tkachev. Now the time has come for Intricate Records to see Tasadi join the labelâs artist pool, Tahaâs debut single Â«You Know MeÂ» is scheduled for March 2013. The trackâs base is built of overall Â«robotizedÂ» progressive sound with tough rhythmic structure which is from time to time interrupted by piano breakdowns.