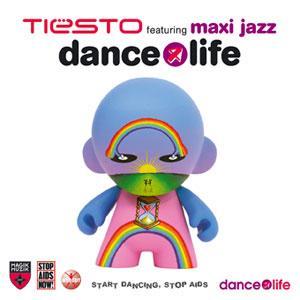 Description
"Dance4Life" is a song recorded by TiÃ«sto and DJ Waakop Reijers, featuring vocals by Maxi Jazz of Faithless. As of May 2006, TiÃ«sto is the official worldwide ambassador for the dance4life foundation. dance4life is an initiative originating in the Netherlands designed to increase awareness of HIV and AIDS in secondary school-aged youth. Kofi Annan, then Secretary General of the United Nations said about the song
â"Dance4Life" is a wonderful example of how the talent and strength of young people can energise our strengths.â

The video for the song is a demonstration of the Small world phenomenon, which is an important concept in the widespread transmission of HIV and AIDS. The original edit of the video demonstrates a link of 6 people from TiÃ«sto back to himself, however the normally broadcast version of it cuts his first appearance out, as well as removing the mention of the phenomenon.

In 2008 TiÃ«sto mixed a new version of "Dance4Life", it is featured in the Elements of Life World Tour DVD as "Dance4Life" (Freedom Mix)". This new mixed version appears in the promotional video for Dance4Life.
Like Edit