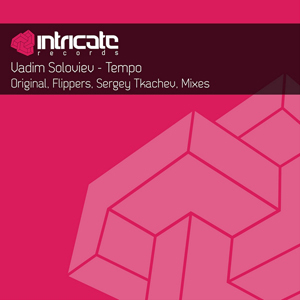 Description
Newest single by Vadim Soloviev, Â«TempoÂ», is scheduled for release on Intricate Records in the last decade of February 2013. Â«TempoÂ» package will consist of the original version as well as remixes by Flippers and Sergey Tkachev.

Yet another musical delicacy is ready to appear on the release catalog of Intricate Records. This time it was cooked by one of the labelâs co-founders, Vadim Soloviev, a prominent figure in the field of electronic dance music and a highly experienced Russian producer. The inner filling of the Â«TempoÂ» track could be described as a simple and understandable melody surrounded by a score of cosmic and funky sounds. This creation is remarkable because of its gradual, progressive type, classical breakdown structure, impressive culmination point and flagging echo in the final part. Very light but, at the same time, very energetic â these are the right words to describe Vadimâs current production preferences. Using the classical music terminology, one could call the original version of the track Â«AllegroÂ», relevant to its tempo. Â«I recorded the initial piece two years ago, but it did not see the light of day due to various reasons, â Vadim reveals some details from the past. â I convinced myself to continue working on this sketch and make it better and better until I felt myself content with the result.

As a resume of this work, there were few versions in front of me, I took a break once again and returned to Â«TempoÂ» one year after. It was worth waiting â the latest remake was good enough not only for myself, but also for my label colleagues, thatâs why we decided to release it on IntricateÂ». The labelâs co-owner Sergey Tkachev presents his own vision of Â«TempoÂ» in a form of remix while the Israeli duo Flippers made the original mix even more dance floor friendly and turned it into club mix.
Like Edit