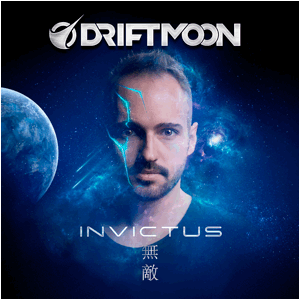 CD 1 1 Driftmoon - The Message (Prologue) 2 Driftmoon - Homines Novi Classis 3 Driftmoon & Eco - Theyâll Never Find Us 4 Driftmoon & The Thrillseekers - What Remains Hidden 5 Driftmoon with John Grand & By An Ion - The One 6 Astrosphere - Fire Which Burns Us All 7 Driftmoon - Revelations (Vihaanâs Theme) 8 Driftmoon feat. Merethe Soltvedt - Calling Of The Void 9 Driftmoon - Invictus (Ishaâs Theme)
Description
In 2016, Juraj âDriftmoonâ KliÄka released â(R)Evolutionâ - his first artist album. Its arrival provoked a warm reception from DJs, big love from fans and positive noises from press. This July, less than 24 months on, his sophomore lands. It is a follow-up really in name only. Between the two pieces lies a gulf, striking in both size and nature. With âInvictusâ, in pretty much every way imaginable, Juraj has raised aim, game and ultimately the Driftmoon name.

âInvictusâ started life not as sounds, but as words and pictures, in graphic novel form. With a mediation-on-loss its central theme, (per Juraj himself) it deals with âa story told from the perspective of a father who is recording his memoirs, before going to the funeral of his two children whoâve died far away, and in circumstances unknownâ.

An extraordinary subject to author on, as Juraj is not yet a father himself.
Lending more insight to this, the Slovakian continues: âI am a firm believer that strong and emotional life experiences can change a human being in their entirety. I wrote the story to try and gain an understanding of how a parent must feel when they lose something theyâve given life to. Thereâs a lot of my own experiences bedded into the story but he clarifies they are figurative in its overall schemeâ.
To realise âInvictusâ in its entirety, it was necessary for Juraj to co-opt talent from both inside the trance realm and out. Over its course, co-producers working alongside him came to include Giuseppe Ottaviani, Eco and The Thrillseekers, as well as studio contemporaries like Robert Nickson, Ferry Tayle and Exis. He also drew on a wealth of singing talent to add additional shades to its story. âInvictusâ has lyrical and vocal contributions from Julie Thompson, Merethe Soltvedt and others - their songs frequently metaphoric parallels echoing its unfolding plot.

Playing a key role in the albumâs extraordinary make-up are its spoken interludes, which relate the story of âInvictusâ. Driftmoon became reacquainted with voiceover artist Robert Polo (with who heâd previously worked and who plays the central part of the father). Polo, in turn, connected him with an American couple living in Prague (Shakespearian actors Guy Roberts & Jessica Boone) who voiced the storyâs siblings.
Commencing in the summer of 2017, storyboarding and writing the screenplay for âInvictusâ took 6 months. The germ of every new track produced for album took seed through an idea on that started life on Jurajâs storyboard. The music mirrors the arc and mood of the tale. From the melancholic & lamenting to the hopeful & uplifting, it ebbs and flows, engaging the listener with the plot in a multidimensional manner.

âApart from the very ending I wrote the whole storyline myself, says Driftmoon. As I do not have kids yet, Robert told me he would write the final monologue, where the father is recording the very last message, talking about his children. âIt was, he says, one of the most emotional moments in my life when he, a professional recording artist, broke down during the recording session, imagining himself in the same shoes as his characterâ.

A project epic in scope and boundless in imagination, one ripe with ambition and ânothingâs impossibleâ attitude, âInviticusâ is a âproductionâ in the truest senses of the words. A release unlike any other from electronic musicâs quarter.
Buy Like Edit