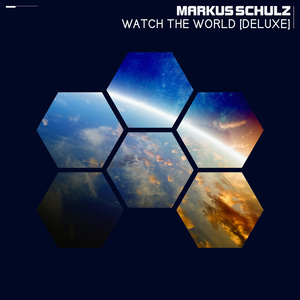 Working in stylistic areas new, penning & co-penning many of the tracksâ lyrics and delivering an entire discâs worth of acoustic versions were just some of the ways in which âWTWâ challenged the Schulz perception chamber. Bringing that development to its natural conclusion this October, Markus signs off on his most transformative long-player to date with its criterion edition.

Never one to do things by halves, Markus commenced the Deluxe Edition by returning each of âWTWâs 15 tracks to the studio and fleshing them out into extended versions. Having brought new detail, nuance & life to each, he also adds two new anthem contenders to âWatch The Worldâs tracklist. Alongside âYou And Iâ, the album now sports âNew York City [Take Me Away]â, a second track captivatingly sung by Adina Butar. Also included is the epic-in-every-sense âLuce Primaâ (literally translated: âfirst lightâ). Conceived to bookend his Tomorrowland 2017âs main-stage daybreak set, here its two parts are reconciled into an ever-building, ever evolving 14-minute-long trance goliath.

Whilst putting together the Deluxe edition, Markus observed that when making âWatch The Worldâ âmy frame of mind was very much in the song-oriented and radio-based zone. As a DJ though you never really lose connection with the club potential of music - no matter what its tone. With hindsight, I realise I was already making plans, subconsciously, for extensions and remixes to âWatch The Worldâs music, before it was even finished. Thatâs a considerable part of what this Deluxe edition is all about and Iâm delighted Iâve finally been able to scratch that mental itch!â

Developing the reach of its music farther still, Markus sketched out a remix blueprint that would allow the tracks to work both individually and as an album-whole. Ranging from the deep to the uplifting, there are reinterpretations from a broad cross-section of the Coldharbour Recordings crew. Among them are Dave Neven, Nifra, Solid Stone and Fisherman & Hawkins, who have each respectively remixed up a storm on âIn The Nightâ, âLove Me Like You Never Didâ, âDestinyâ & âFavourite Nightmareâ.

There are also rebuilds from legendary trance greats such as Solarstone, Kyau & Albert and 4 Strings, as well as more recent additions to its establishment like Standerwick, Gai Barone and Amir Hussain. Given Markusâ well-known eye & ear for talent spotting, many emerging names are likewise represented. The likes of Dream Sequence, Claus Backslash, Daxson, Artisan & Dawn all weigh in with spectrum-trance remixes, while elsewhere thereâs an electro-pop spin of âI Hear You Callingâ from We Rabbitz and âSummer Dreamâs trop-house take-on, courtesy of JackLNDN.
Buy Like Edit